A week and a half ago, I did something that I hadn't done in a while. I raced on trails! Running on trails is very infrequent for me, racing even more so. It's not that I don't like them, it just isn't my first choice right now. But, I had agreed to do this race and was even excited about it. It is the last Trails ROC race of the year, very low key, low priced ($1 for every mile you run- 5, 10, and 15 mile options), and all around a fun afternoon. I spectated last year, which was quite a bit different scenery. The race is called 0 Degree WTF, as in...Winter Trail Festival. This unseasonably warm weather we are having didn't bode well for the "winter" part of the race. The race director scolded the runners for our lack of properly functioning snow dances- sorry Eric, I didn't do one at all.
I felt a little out of place pre-race, but eventually decided to go out and run a short warm-up and shake off the cobwebs. I only did a little over a mile on the roads around the lodge, but was enough to get my legs ready and my mind prepared to handle 10 miles of trails. I finished my bottle of UCAN and ate a pack of honey stinger chews for good measure.

Something I love about trail races is the feeling of ease at a start line. It's so much less formal, everyone is just joking around, laughing and saying well wishes. It's not that they aren't serious, don't care, and aren't about to kick ass- it's just generally more laid back. I like that.
The course is a 5 mile loop with roughly 1300 feet of elevation gain throughout. The 5 milers run the loop once, 10 mile race twice(2600ish ft/gain), and 15 miler rounds out 3 loops(3900 ft/gain). When I signed up for the race, I decided on the 10 as an active challenge but not over reaching with the 15 miler (after not running trails, not running a ton of hills, and also coming back from taking a week off of running). That elevation or distance might not be a lot for some people- but I knew it was going to be character building for myself.

The first loop, was great until it wasn't. I found my heart rate absolutely skyrocketing with each climb, even when walking. I hiked hills when I needed, and focused on preserving myself- I didn't want to walk the entire second loop. "Ski hill" was a bitch, and admittedly defeated me the first time through. I passed off my gloves at the top, and walked for a bit after trying to re-focus. A while later came "hell on roots", though there was a rope to help climb it unlike when I ascended it on a preview run. I did my best, and reached the top trying to smile. I definitely muttered something like "I'd rather do a marathon". That was the fear and insecurity talking. I'm comfortable on roads, I'm comfortable pushing pace and breathing heavy on asphalt, and I'm comfortable with 26 miles. 10 miles of trails isn't comfortable when you don't do them often, it isn't naturally easy for me and I let some negative thoughts get the best of me.

Then I remembered why I was doing this race in the first place. To be uncomfortable, to do something different in the "offseason", and also to appease Eric of Trails ROC who had been asking me to try trail race for a while now. I was there to run, have fun, experience some scenery change and to challenge myself--I spent a minute reminding myself of that and then embraced the rest of the first loop and got excited to go at it again.

Between loops, I stopped at the aid table and drank some of my Nuun that I had left there. It wasn't a long stop but it was good to hydrate, and catch my breath for a minute before heading back out. I had caught up to two men also in the 10 mile race, and figured it would be good to push myself and chase for a while. We bantered back and forth, and our pack of 3 went down to two. I had found a new set of wheels and was having a blast. The guy I was running behind at one point asked "you're not going to make this easy on me are you?"....I replied with a simple "nope". Friendly competition at it's finest. 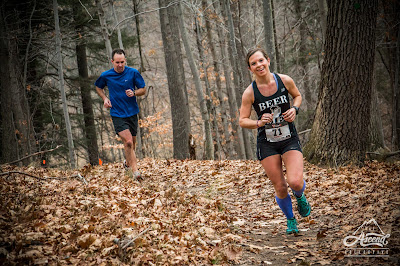 I hiked up "Ski hill" again, but with a much better attitude. I went up "hell on roots" still huffing a bit but again....a better attitude made all the difference. Shortly after that I knew I could run the rest and at a decent enough pace. I could still have a strong finish. I tackled the rest and ran the last bit of the course (around a grass field to the finish) as if I were on the roads- that felt good. I got my big high five at the finish, crossing first female and third overall for the 10 mile distance.

Post-race was, in my head- how it should be. Cheer for other runners, congratulate others on their race, share beers with friends and strangers, and take joy in the fact that we have a commonality in running. Being the "new girl" in the situation was a little odd at first, but the cries of "she doesn't even go here!" never came. Most everyone was welcoming, inviting (for more trail running, of course), and friendly. We chatted running (trails and roads), beer and life- I left the race with a big smile on my face and it had little to do with a time or a placement but for an experience.

If you want to see some AWESOME photos from the race, check out The Ascend Collective- WTF Gallery--> here.