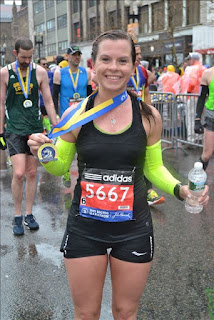 Where do I start when talking about myself? Running is clearly a big part of my life, but not the only thing. I was born and raised and still reside in Upstate, NY (No, it's not anywhere near NYC). I work in finance by day and can usually be found running around a bar or restaurant working part time a few days a week as well(to fund the next running adventure). When not running, I'm usually hanging out at home with my boyfriend and our two dogs. We lead a pretty simple life, but in the best way. We love our time together, with friends or family as well. I try not to take anything too seriously, and I try to be as positive but also as real as possible. I don't want to sugarcoat anything, or pretend life is always awesome. All things considered though, I'm a pretty lucky person and know I have a LOT to be thankful for. I also write under the alias Barley over at Salty Running, where I am the resident beer drinker and numbers nerd.


How did I get started with running?
Well I have been a runner as long as I can remember, chasing cookies and boys and whatever else. I started running track in 7th grade and I never looked back. Although I was not a distance runner by any means. My love for the sport gained me some recognition in college at the national level, being named All-American will always be one of my most proud accomplishments. But I was a much different runner back then, hell I got mad if coach made me run anything more than an 800.

After getting sick in 2009, having my world turned upside down- I ran my first 5k. You can read more about that here, it's more about how I got started in 'distance' running (5k definitely used to be distance for me) and how I used running as a tool mentally and physically.

In 2010 I ran my first half- marathon, and was officially hooked. I continued to run MANY races varying from 5k-13.1. But I decided in late fall of 2010 that I wanted more- here enters the crazy decision to run a marathon. I was convinced I would be one and done, and I was okay with that. 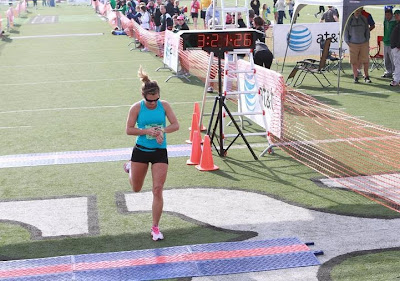 If you want to know more about my marathon journey (well, at least the first 5),
this post is all about that. You can read about the rest over on Race, Paces & Places.

As for becoming a Triathlete.....
In 2013 I challenged myself by starting to break into triathlons.
It's still a new adventure for me, but something I have really learned to enjoy.
I did my first multi sport event ever in the spring, followed by my first triathlon, and then my first half-ironman that summer. Eventually I plan on doing another half as well as a full-Ironman. Someday. 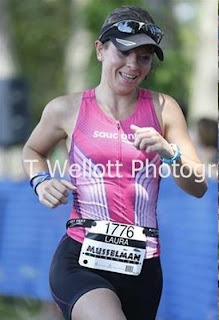 Bottom Line
As you can tell, I love this whole one foot in front of the other thing. It's a huge part of my life and I don't hide that, nor am I ashamed of that. It's a passion that I don't ever see fading, nor would I ever want it to.

Thanks for Reading!
~ Laura