Now that I have had time to sit down and really think about this race, holy cow I did my first triathlon! EEK! The race was held at Keuka College on Keuka Lake in PennYan, NY. This is particularly special to me because John and I will be getting married right down the road from here in 457 days (who's counting?). We stayed at John's parents house on Seneca Lake the night before, which made for a 15 minute morning commute instead of over an hour.


Warning this is long, but has lots of goofy photos...

I woke up around 4:45 to the sound of rain pounding on the house and the lake. I had 2 fears, 1.) that the weather would be crappy and make for a really hard first tri, and 2.)That if the weather was so bad that they would cancel all together (which I didn't want either..I needed the experience).

I made myself breakfast and ate it on the road, the weather was clearing up but I was still...ummm nervous? We parked and made our way to body marking outside of transition, and then I went in to set all of my stuff up. I met a girl named Kim who was right next to me in transition and we chatted for a bit which actually helped calm my nerves. 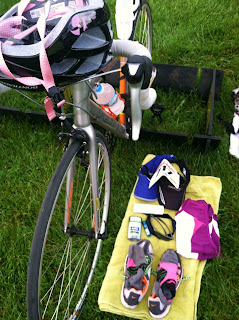 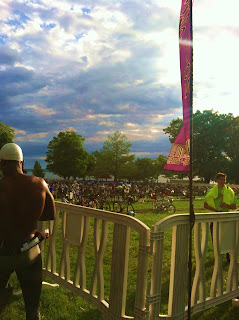 We made our way down to the shore for the long wait, my wave wasn't going off until 8:30. We hung out with friends and tried to pass the time, and keep me from freaking out.

Swim
22:53
First open water swim 'race'. Placed myself in the back and just tried to go steady. Luckily never truly panicked, just a little. On straightaway back to shore going into the current I lost it. I probably swam a TON extra, I kept swimming into center and not to shore. I lost a few minutes here, at the very least! I got out of the water and was tired, it was a good thing I didn't wear a watch, because I was much slower than I even expected and mentally that would have been hard to see. I have so much respect for strong swimmers, even more so now than before...holy cow. 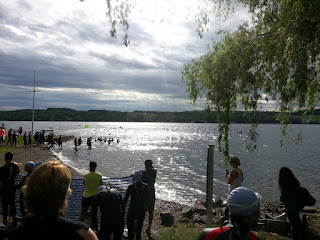 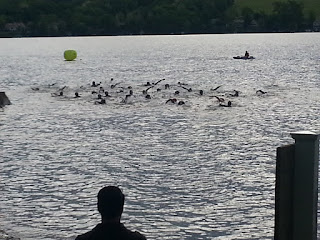 T1
2:50
Wetsuit came off pretty quick, I swam in my sports bra and tri shorts underneath and getting my tri top on was hard it kept sticking because I was wet. Note to self: just wear it underneath next time. 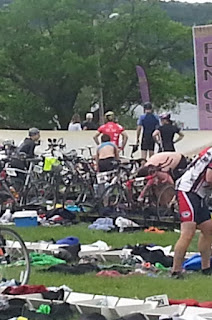 John even said after, that he thought I was taking my time and didn't seem in a hurry during transition. My reaction: "I was...that swim had me out of breath and I wanted to nap"...no nap for me but I did want to take a minute to collect myself. Took my time getting my shoes on and catching my breath and collecting my thoughts for the bike and the run. 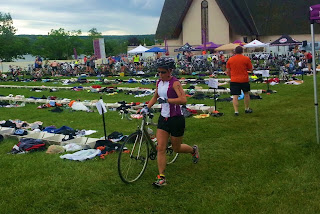 Bike
47:23 (17.6 mph)
First few miles I felt super slow, but had no gauge on how slow since I went watch-less. I knew that the turnaround was going to be sharp to mentally I prepared myself for that, and the hill which follows it. The rain started, and it actually helped cool me off. I had a woman who would pass me and then slow down and block left instead of getting to the right, it was annoying and she did it multiple times. Finally I made it through the turnaround and decided to just hammer up the hill past her and NOT let her get me again...she didn't. I was really proud of how I handled the hill and definitely cruised back much faster than I started. Two things I noticed on the bike, I've gotten more confident and stronger on the bike since the Du in April, and I didn't spend the whole time going "just get me to the run" which was awesome. I had 34th fastest bike time for women and 3rd fastest for my AG, I was making up plenty of ground after the swim!

T2
46 seconds
Since I don't clip yet, T2 was easy. Rack the bike, drop the helmet, grab my race belt with bib and go. No need to collect myself during T2, I was more than ready to run! I had the fastest T2 split for all women (it really helps not changing shoes, and the fact that running is my favorite so I want to start it sooner!) I did forget to take my bike gloves off before running out of transition, so I took them off while running and stuffed them in my shorts, true story. haha! 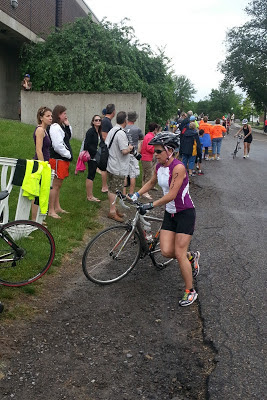 Run
21:13 (6:51)
Again, this was hard because I never knew at any point how fast I was going or how far I had gone. It felt smooth and easy though on my legs. I slowly picked people off and found myself passing more and more as time went. It was clear that running was my element (not that I doubted that). I really like that my favorite and strongest event is last, it really helps me mentally knowing I can finish strong. I ran the 2nd fastest 5k time for all women and I was pleased by that.
Joe got me running through right before the final chute! :) Thanks for coming out and cheering!

1:35:05
The finish chute was fun, I was smiling ear to ear and I even did a little jump in the air when I saw John and his friends cheering for me. Hearing my name called across the line by Mary Eggers was amazing, talk about a true inspiration. I did it, my first triathlon and in a decent time (by my standards). 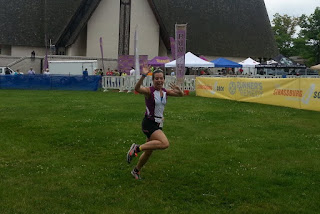 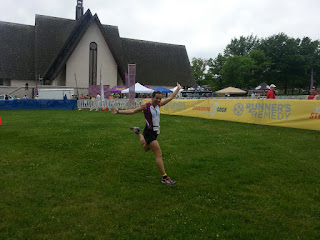 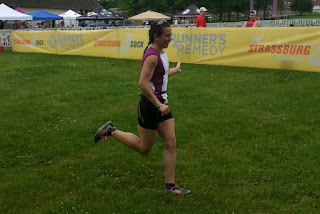 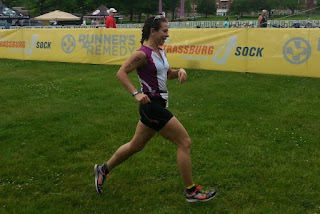 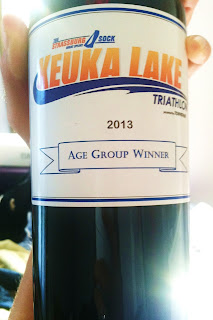 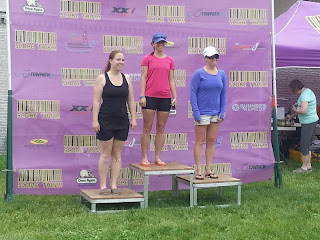 Fueling for the day: PB&J on bagel thin for breakfast. No coffee, yep you heard me right. (this wasn't planned, but it worked out). Handful of EnergyBits before heading down to the swim. A few swigs of gatorade during T1, water and 1/2 Clif Shot Gel on bike (gels are really only option on bike), and nothing on the run. Lots of post race ice cream though.

My Gear for the day: Wetsuit, TYR goggles, Saucony Triathlon shorts, Zoot Tri-top (was too big, but good news is that I treated myself on Monday and ordered the Saucony fitted tri-top that I have had my eye on!), Felt ZW100 road bike, Bontrager Helmet, Saucony Kinvara Socks, My old racing flats (which are being replaced with Saucony A5's within next few weeks), Road ID, Saucony Speed run Visor (didn't end up needing, but it was in trans. just in case), Bike gloves, Sunglasses. 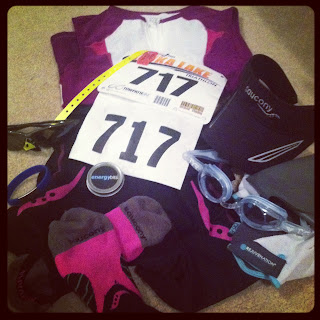 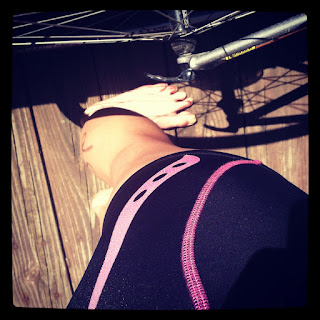 Thoughts:
Had I swam what I thought I was going to, I would have been top 10, but I don't want to play the what-if game, it's pointless. So instead I'm going to play the "I will be in the water at least 3-4 times a week for the next 6 weeks before Musselman 70.3 Game" (much more fun of a game, don't you think?)

I would definitely do this race again, beautiful area and it is even more sentimental to me because John and I are getting married on Keuka Lake next September!

Do I have the tri-bug (everyone told me I would after this)....maybe a little...but I can't decide if it's the tri-bug or just the "I know I can do better bug".

Every race (including running) should have your AG marker on your calf, totally awesome knowing when I pass someone if they are in my AG or not. Although the whole USAT "age" thing is odd. For those of you who don't know, in the tri-world your age on race day is not necessarily the age you go by. Your age is determined by what your age will be at the end of the year. Therefore because I turn 26 in a few months, I was considered 26 and not 25 on race day. USAT: making athletes everywhere feel older than they are.

I'm a little on the fence about calling myself a triathlete after this. Yes I did a tri, but I guess I just don't feel like one yet, maybe once a do a few more. I felt the same way after I did my first marathon a few years ago. I didn't necessarily call myself a marathoner right away, I ran one but was that enough for ME? That's a personal thing though, it has nothing to do with any thoughts of "doing one doesn't make you one" that is not the case at all. Its a personal and emotional thing, I'll know when I feel comfortable calling myself one, because I will feel like one. And right now I feel like a runner "trying to tri" and not a runner and a triathlete.

I'm so lucky to have had John there with me and supporting me. His support of me and knowledge about triathlons made me feel so much more comfortable as I took a new step. Also made me feel less bad about the fact that I left my engagement ring at home (for fear of forcing the state to drain the lake had I lost it in the water).

Okay, I know that was long and most of you probably aren't reading this. But good news is I can look back at this down the road and see EXACTLY how my first tri went :)

When did you first call yourself a runner/triathlete/marathoner etc?
After one, or did it take you time to feel like that?


And in my true nature of diving in head first...this was my first tri..and 6 weeks (from that date) (a little over 5 weeks from now) I have my first 70.3 at Musselman! I signed up for it back in December, it's becoming much more real now! I know I can do it, going to get my swim time down too!