The Oak tree Half marathon is one of my favorite races and probably always will be. It's close to my hometown, MANY of my friends run it, it mainly runs on back roads like ones I grew up on....and it falls on Labor day weekend. My birthday is always right around labor day, but in general I just love that weekend because it's in my head the beginning of a "new season".

The first time I ran the race was in 2011, it happened to fall smack dab on my birthday. I won the race that year with a 1:36 (which was a PR at the time). In 2012 I went back and ran 1:35 for 3rd place. Even though I love this race, I hadn't been back to it since then. It became a new tradition to always be at our cabin in the 1000 Islands for the weekend, and wasn't going to commute back 3 hours for a race.

This year though, it worked out to run again as Brian and I had to be around home for the weekend for a wedding and some family events. The race, also fell on my birthday again this year so it was kind of a no brainer. For my birthday, I wanted to run the race and spend the morning with my friends. I even convinced Heather to come out and run it as well.

The course is not an easy one, but it isn't impossible by any means. There are 2 main climbs, and a good chunk of the course is on dirt/gravel back roads. The race field is usually small but occasionally gets some faster runners. The course records are 1:23 for women and 1:08 for men, though the winning times are rarely that fast(see my 1:36 in 2011).

Heather came out the night before the race and spent the evening with Brian, myself, and Brian's family(they were in town from the wedding). It was low key back yard BBQ and good times relaxing.

In the morning, things went smoothly getting on the road and getting to the race about 45 minutes before the start while finishing my pre race drink in the car. It starts/finishes at the high school which makes for ample bathrooms- always a plus.  Heather and I did about a mile warm-up due to time and then headed to the start after saying bye to Brian. I opted not to wear my flats because I knew it would hurt with the gravel, and went with my Fastwitch instead (what I used for workouts, and marathon). I also, for the first time wore a crop top. I love sports bra running but have been looking for a crop for a while to see if I would like it. Found this one on Amazon and am really happy with it. 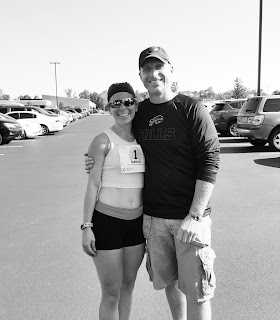 It was admittedly a beautiful morning. We were chilly when we got up (perfect!) and it was in the 50-60's for the race, with nice sunshine and blue sky. It was warming up quick but early start time definitely helps along with the breeze.

At the start I saw a bunch of good friends, including Dawn who I knew was about to wipe the floor with me on this course. There was another local runner who I knew was going to be in front of me, so in my head I knew that vying for podium meant third. I had a challenging few weeks physically and emotionally leading up to this so I wasn't 100% sure how it would go but was planning around 1:30-31, coach had agreed with that. I know I'm not in PR shape yet, and still returning to my pre-Boston form.

These are pavement miles, where you run into town and around the fountain and then back outside of town. I love this section because you get to see all of the other runners due to out and back nature of it and then also run through the scream tunnel of the 5k participants waiting to start. I wound up in 5th during these miles and was just focusing on running comfortably hard. The miles ticked off and I was surprised how good they felt.

When you turn left onto Nations road is where the race really begins. At this point it's a long downhill on dirt/gravel, it's hard not to fly down but I maintained pretty good control and used it to sling shot around the corner at the bottom. I was running near a few people, we bobbed back and forth and I could see 4th/3rd places far in front of me. The race starts spreading out more and more each mile around this point.

Right after mile 5, you turn right to head up Roots Tavern. A long gradual which accounted for the slower 6th and 7th miles (which I knew would be the case). I focused on short strides and even effort, my heart rate jumped a ton for this section until I realized I needed to breathe and let it calm down. We were right in the sun, so I was glad I had my shades on and tried to tuck in any tree shadows when I could.

Part of 7 and 8 you pop back up on main road for a short period which was nice reprieve from the gravel and allowed me to pick things up a little bit and mentally shift gears. 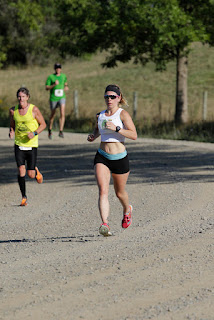 8 is a nice downhill stretch (but back on gravel) and it allowed me to see 3rd and 4th place women ahead of in the distance again. About halfway down the hill I caught fourth place, just one more to go. A few guys and I picked up the pace going back and forth, I mentioned I was trying to catch the girl in 3rd (who, lucky for me was wearing BRIGHT yellow shirt which gave me something to focus on). Before 10 you start the slight uphill getting ready to curve back around to Nations road (the long downhill after mile 3). It was a strange feeling but I really had shifted gears into race mode and was like...I want to catch that girl. Much of the race leading up to that was, just run comfortably hard and save enough for Nations hill at the end.

Helllooooo Nations hill. I love/hate this hill. It's gorgeous scenery but will mentally break you if you aren't ready to fight back against it. I didn't look at my watch, just trucked up (slowly) and bided my time until I could get to the top where we go back on main roads (and a gentle downhill to the finish). I could still see yellow shirt, but knew trying to push and catch her on the hill wouldn't be smart. I got a few cheers and "Happy Birthday's" from people I knew out on the course which made me smile- and also made a few runners around me say HBD too.

As soon as I got on the road I just stared at yellow shirt back and ran hard until I could get close. Oddly this was the fastest of the day at that point but my heart rate was the lowest during this point. It took me nearly the entire mile to catch her, and finally did right as we got back towards the school. I snuck inside on her right and then turned into the school and onto the track for the finish. A few friends were out cheering, and the announcer knows me so I could hear him yelling for me. I also heard him mention the girl behind me so I had no idea if she was close or not. I hauled ass around the track and finished in 3rd with about 20 seconds to spare.

1:29:05 is my official time which is a 6ish minute PR for the course. Knowing what I know about this race, the course, and where I am at with my fitness given everything this year- I am really happy with how it all went. It's a LITTLE bit of sting because that is the exact pace I ran for my marathon last fall, and I know I couldn't hold that pace that long (right now). But at the same time, it's still progress from where I was a few months ago.

I caught up with Brian and Dawn(she ended up second!), while we waited for Heather to come through. She was running this as a hard workout but knew she was going to have a good day. When I saw her, I called up to my friend who was announcing and had him cheer her in for me on the loudspeaker (ha she probably looooved that). 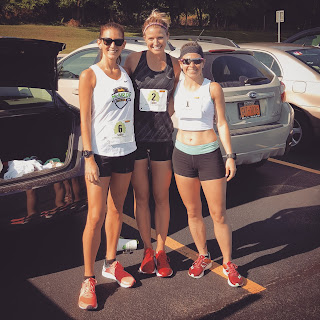 After the race we did a slow 2 mile cool down chatting, and then got back to hang out for awards and birthday celebration with some of my friends. It was so nice to just relax a bit and chat with people I don't see nearly often enough.

Later that day Brian and I headed up to the cabin in the islands to spend time with my parents. We decided a few weeks beforehand that we would take Tuesday off work so we could spend a few days up there for some R&R. Much needed after working every day the month of August, and also not getting extended time with my parents (mom especially since she lives out of state right now) since early July! 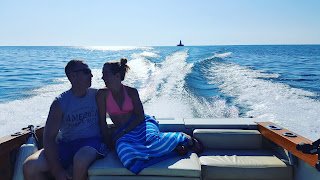