A few weeks behind on this recap, but better late than never! The race was September 17th, and my first half marathon since having Hannah!

"Training"
Probably best to back up a tiny bit and talk about the lead up to this race. When I started running again I kind of had Rochester half in my head. I wasn't overly enthused for the race itself but more for the distance, and easy logistics for my first half marathon back postpartum. The course changed a few years ago, and this would be the first time I ran the new course (though I knew the terrain pretty well regardless except one section which will come into play later on).

Based on how my return to running had been going (20 weeks postpartum running update), I felt pretty good with where I was at. I knew I needed to be consistent with training, work on some hills, and start digging into my gritty reserves for race day.

Workout wise I hadn't done a ton but I wasn't flying totally without some turnover prep. Bergen 5k in August gave me good idea of where I was at for training and race paces. I knew that I would scale slightly based on experience but also the other way for not having a huge base. I at least had SOME idea where I could expect to be and how I should train.

Pre-Race
The morning of the race went pretty smooth, after planning as much as possible and with some help from Brian and friends. I got up super early, pumped while drinking cold coffee, got ready and drove to a parking lot near the start. There, I pumped again in my car (ordering a car charger was super helpful ahead of time, then packed the milk in bags and stored in my bottle bag with an ice pack so it didn't go to waste sitting in my car), and drank my UCAN while eating some PB&J too. My friend and her husband met me there and took my bag for me so I wouldn't have to worry.

I jogged the 3/4 mile to the start and did some strides and drills while waiting to go. It was 99% humidity out, and you could definitely feel it. I opted to run in sports bra and bullet shorts (#sobrave) to be more comfortable, and it was a smart move. I also opted to wear my fastwitches instead of Type A racing flats for a little more support on hills; but also because I'm not confident enough in my base at this point to put in the distance with flats. Or I could have just worn 5k flats and increased my risk of foot fracture ten-fold, but figured why do something stupid when I know better.

I planned to run 100% by effort and not pace, and also to NOT stress about a time. I figured I would run 1:35 on a good day, potentially closer to 1:40 given the humidity and terrain. Honestly I really didn't care what I ran, I simply wanted to just run and see what happened.

Miles 1 & 2
Running by effort, it's cool. Except when you haven't been training that long and really haven't re-honed in your pacing skills. Took off with the crowd, slightly downhill and wrapped up the first 2 miles in 6:37 (LOLOLOLOL), but at least chilled a bit for 6:55 mile 2.

Miles 3-5
I knew these miles very well, and with the downhill terrain tried to go with effort but also reel in a bit. I enjoy running down through turning point park and over the boardwalk. I knew that the short steep Petten st. climb would be a pain but one that was short lasting. Honestly, I don't even remember going up it, except hearing my friend Dave cheering for me at the top. I knew I would see Brian around mile 5 so it gave me something to look forward to. I saw my friend Maria cheering, and then saw Brian and Hannah standing near the corner cheering and it was honestly one of my favorite parts of the morning. 6:50, 6:55, 6:56

Miles 6-9
Seeing Brian and Hannah put some pep in my step as I went over the O'Rourke bridge and then up Thomas hill. I worked with a few other runners and we just trucked along. The stretch along St. Paul is gradual incline but straight shot so easy to zone out. I found myself wanting a turn or some change in terrain to force my mind to work a bit more. I was happy with the consistent groove I held through this section though and felt pretty smooth. I took a gel somewhere in here, with a few swigs of water at an aid station. Got to see a few friends along this section which is always helpful too! 7:08,7:02,6:58,7:07 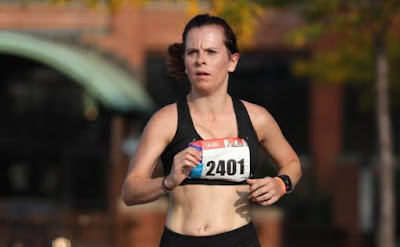 Miles 10 & 11
After mile 9 I didn't know the course until the last half mile. This isn't a complaint, this isn't a fault, this is just unfamiliar territory and part of my city I haven't run before. If anything it was good because it made my mind work a bit more trying to figure out where I was going. I had been told there was a hill around 11, and I naively assumed it was indeed shortly before or at 11. There was a few little rollers as we weaved through the falls/bridges, I was getting tired but knew I could hold till the finish. I hit mile 11 and assumed I wasn't paying attention and ran the hill. Wrong. 7:21,7:33

Mile 12
So a little after 11 we looped through a spot where I really didn't know the area, crossed a cool metal bridge and then...I looked to my left and saw a hill and was like- oh that sucks at least we don't....oh come on we're going up that? As a standalone hill it's FAR from the hardest I've done. But being at mile 11.5ish of a half marathon, and also being BROKEN CONCRETE AND SHITTY ROAD CONDITIONS...I was annoyed. I got part way up it and decided to hike for about 20 seconds. According to my gps file/strava this didn't even slow me down much because I was hiking at the speed I was trying to "run" it. This also allowed me to pay more attention to where I was stepping as not to break my ankle. But, alas I got to the top and took some water from an aid station and kept going. 7:47

Mile 13 & through the finish 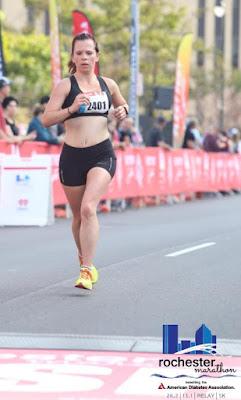 This is where fast start + lack of good base training really kicked in and I was just tired and wanted to be done. I wasn't running with many people around me and just willed my way through the last bit. Crossing over the Pont De Rennes bridge was cool, through high falls area and then towards the stadium for the finish. I was cramping a bit and so focused on just being done that I didn't see people cheering (they were there) but I did hear them which helped. Crossed, chugged some water, chocolate milk and hugged my people. I love my people. We stayed for a while after cheering for finishers and then eventually the full marathoners coming through. It was a hot one in the sun and I didn't envy those going twice as long. I thought I would since I love marathons more than halves, but not that day.

Post-Race
I had no reason to not be happy after the race. I was 4.5 months postpartum/post-cesarean, I ran a half marathon, I saw my people, and I felt an inch closer to being myself again. I don't even regret going out too fast- it was a great reminder of the YEARS of pace work that I did to work on NOT doing that, it's certainly not going to come back to me overnight. Praising my imperfections and progress- because that is where you grow.

What's next?
So admittedly, I thought I would finish regardless of time and feel like I wanted to do more halves this fall and chip away. NOPE. NOPE. NOPE. I realized that I am content with shorter stuff right now, and my brain isn't ready for halves or fulls YET. But, I'm also really excited to finish out the year getting a base back, jumping in other shorter races, and going with the flow. I know that when I kick off '18 I'll want a half or a full to work towards, but I'm not in any rush at this moment for that. A few months of other stuff is exactly what I want and need. I'm going to run a few October 5k's to get some more experience back under my belt, and then try to race East Ave Grocery Run on November 4. I don't know what that time will look like but I don't care, I'm just excited to be working hard again but on my own terms as I still work on this new mom thing at the same time.
Posted by Unknown at 3:00 PM