As I said in my last post, this blog isn't going to turn into 100% pregnancy writing- but it will be a common theme for a while. Seeing as, I'm cooking a kiddo for a few more months and it naturally will have a big effect on my daily life, not just my running.

Pregnancy has not been all sunshine and roses, even if you wanted/planned this it doesn't mean it still won't be hard. I think that is a common misconception I have seen before. A woman who gets pregnant and was trying and really wants a kid, gets shamed if she says anything other than she is just SO excited. Let me get this out there now that I don't agree with that at all. Moving on though, I wanted to wrap up my first trimester (we're 15 weeks today so already chugging along in the second). I tried to cover most bases, being open but also honest.

Nausea, fatigue- the common stuff. While many runners compare pregnancy to marathon training (there really are a lot of parallels) I have to say that the fatigue of pregnancy (for ME) is tougher because you cannot catch up on it. If I have a few bad nights of sleep during training + all the work, I know that if I get a few solid weekend nights I'm as good as new for the most part. These days, it doesn't matter if I get 5 or 10 hours of sleep a night, by the time bedtime (or couch time) rolls around the next day I'm toast. That isn't even including the multiple times I actually almost fell asleep in my lunch at work.

Besides that, some random symptoms have popped up; pregnancy induced bleeding gums (it's a thing, it's dumb and apparently nothing I can do about it), newly developed Gastric reflux (it's gross but manageable), nothing too crazy though. The vivid dreams have been CRAZY and most mornings I wake up wondering what was real and what wasn't. It's amazing to me what hormones do to your body.

Should probably add in baby brain/pregnancy brain/momnesia started to kick in early. Some days I feel straight up dumb and forgetful! This makes my nerdy compulsion for spreadsheets, to-do lists, and post-it notes even more important. We've laughed at it for the most part though!

The first 8 weeks I didn't gain anything. Between 8-10 weeks I gained 4 pounds though, and held that through the end of the trimester. I outgrew a lot of my normal pants pretty quick, which I expected. When a lot of your clothes were bought during marathon training a small change in waistline will be felt quicker! I don't know why people put off wearing maternity clothes though, they're pretty dang comfortable.

But I also admit, the whole getting bigger and changing clothes thing hasn't affected me as much mentally as I thought it would. I'm sure that will change at some point, but for now I'm fascinated and excited about the expanding belly and am thoroughly comfortable in stretchy waist pants and ruched tops. I have an awesome sister who gave me a TON of maternity clothes so I feel like I have an entire new wardrobe which I won't complain about. I also bought a few more basics to get me started; Old Navy & Target have been awesome for those. So has this Belly Band combined with the rubber band trick.
As for running, since my gear is obviously mostly spandex things still fit for the most part. I have found the best running clothes right now are those with wider waistbands, it's simply more comfortable. (Pinnacle Shorts, Scoot Capri have been my go-to's). My go to sports bra has been the Rock-It Bra Top because it's not a set band/cup size (they size them S,M, L instead of 34B etc.) so there is a bit more wiggle room as I uhhhh grow.

I went through spurts with what I wanted to eat. For a few weeks it was anything processed, and by processed I mean...processed AF. Chef Boyardee, Easy Mac, anything quick and high in calories sounded amazing to me.

Then I went into the current stage which has been fruits(berries, oranges and grapefruit specifically), veggies/ranch, certain salads, and cereal. ALL THE CEREAL. I don't currently have any aversions, other than the smell of tuna. But if something doesn't sound good to me I don't want it. I normally love tacos and Mexican and had no appetite for that for a while now.

In general, I didn't do much. On average once a week. Quite frankly I was fine with it. Part of it was nerves, part of it was the fatigue....and part of it was...I've been going so hard with training for 4+ years right now that the break feels so refreshing. I know activity is good, and that it will help labor- but I'm also not going to push myself. I wrote out my 1st Trimester training log over on Salty Running.

It is worth noting that I did run a half marathon about a week after we found out about the baby. We were in North Carolina visiting family (during Hurricane Matthew) and I decided to still run the Volition America Half Marathon. It was disgusting wind and rain but could have been worse. (I really won't complain about this much....people lost their homes and lives- can we stop bitching about race weather all the time? Bad weather affects far more important things than your race).

Weather + being pregnant took the pressure off and I just ran by feel and  raced for place and to have fun. I chatted with some other runners, met some new people and generally enjoyed most of the race- I did kind of just want to be done the last few miles though. Me and baby(6 weeks) walked away with the win and a 1:29 half marathon, It wasn't effortless by any means but I was happy with it and finished with soaking wet hugs from Brian and his Aunt/Uncle who stood out there cheering for us. 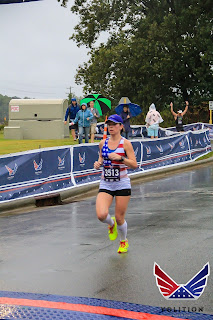 The Anxiety of Pregnancy After Loss

I can and will write an entire post on this all together. This is tough. It's scary. It takes away some of the excitement. It consumes you. BUT, its manageable.

I am incredibly lucky to have a doctor who understood that and agreed we would keep a very close eye for baby sake, and my peace of mind. I went for ultrasounds at 5, 7 ,9 and 12 weeks with regular OB checkups at 8 and 10 weeks. Overkill, maybe? But when you have a maxed out deductible and a very anxious pregnant woman- you just do it.

I also made a point to have some regular contact with my therapist. I have no issues talking about that, she is someone I have seen on and off for years and has helped me through some of the most trying times. Most of our sessions didn't even end up being the OMG emotional ones- if anything it was simply nice to have an unbiased person to talk to about everything in life and not just growing a baby.

Beside professionals- I made sure to be in touch with close friends and family that understand where I'm at. It's not something you really get unless you've been through it. Brian and I also had to find our own ways to cope in the first few weeks- not everyone processes things the same. But at the end of the day we had each other, want the same thing and have the same fears and worries. We have amazing friends and family, and everyone has been so supportive and I cannot begin to express how that makes me feel.

Things We Did For Baby During 1st Trimester

So that is essentially how things went for the first trimester! I feel like it flew by most of the time, and can't believe we are already 1/3 of the way there! We cannot wait to meet our little one, but know we have a lot to do in the mean time. Thank goodness my second trimester started with some fresh energy to help!