Considering I now have an adorable 7 week old daughter *SPOILER* , I should probably finish this post about my third trimester. It was certainly a roller coaster of a few weeks, and ended a few weeks early- but a time I still feel compelled to write about because well....it happened.

I felt my third trimester kick off before it even officially started. The start of my 27th week (technically last week of second trimester) the fatigue ramped up, and morning sickness came back. I had been feeling pretty good and had a relatively smooth pregnancy (First Tri, Second Tri) so far so I kind of expected a little karma on that one. 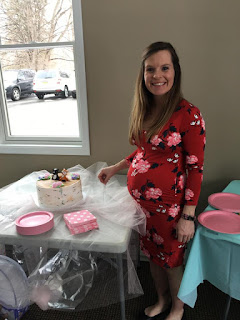 But the symptoms weren't really the roller coaster part during my third trimester. The fatigue, nightmares and general "meh" feeling were consistent and I had pretty much accepted them. The roller coaster was everything else going on.

Early on in the trimester we had some of the fun stuff! I went to a baby shower for a good friend of mine and then the following weekend was my baby shower with my side of the family. My mom and sister went over the top to make the day incredible for us. It was fun, and overwhelming all at the same time.  Being the center of attention, and everyone quite literally spoiling our baby before she is even born. Our little girl is already stocked up on Saucony stuff, Bills gear, Hockey swag, cute headbands and lots of other fun things.

The weekend after that is when the roller coaster really started for us though. The day after I hit 30 weeks I woke up to one of our dogs sitting by the bed barking. Moose doesn't normally do this, so I knew something was up. As soon as I stood up I realized I wasn't feeling good and that it was me having the issue. I had what felt like intense bloating/gas pain in my stomach. I went to the bathroom, no help. Took a hot shower, no help. It was getting worse and Brian was already at work so I called the doctor. I was driving myself to the hospital before I knew it, and making the call to have him meet me there. {I may have gotten yelled at for that...woops #independentwoman}

I figured out where to go (we hadn't taken the hospital tour or orientation yet), and they had me hooked up shortly after getting there. The only thing the nurse would tell me was that the baby was okay (because I kept asking... repeatedly) even as the pain was getting more intense. As soon as Brian got there- the doctor laid it all out there.

You're having regular labor contractions.

"It's too soon, it's too soon" Were the only words I could really get out.

I spent the rest of the day in a labor room with Brian, with doctors and nurses were coming in regularly. My dad and sister also came up to visit and hang out- which was a good distraction. The NICU staff came and explained the implications of a 30 week baby, and checked to see how things were progressing (or not). I was being pumped full of Magnesium, and fluids (I wasn't allowed to eat or drink anything at all in case they had to take me to surgery). I was getting shots in my rear a few times (Steroids for the babies lungs, and pain killers for me) which was SUPER fun. I was also being given a blood pressure medication every few hours to prevent smooth muscle contractions (my blood pressure was fine). This is how they were attempting to stop labor, even though they warned us it's rarely that effective.

We also were sent for an ultrasound to confirm the baby was growing well (she was 3.5 pounds at the time). We then found out that my cervix had shortened drastically since my last full ultrasound at 20 weeks. This pregnancy went from uncomplicated to high risk in the matter of hours, as I laid there trying my hardest not to freak out {believe me when I say I was, in fact freaking out}.

Lucky for us, the rarely effective way of stopping labor....actually worked. By 9 PM my contractions had diminished and I was being moved off the labor floor and into a high risk OB room. I had to stay in the hospital the rest of the weekend, for more steroids shots and a few more doses of the blood pressure medication to make sure labor stayed at bay.

I was sent home with little restrictions and told that she could still go full term but to be prepared if she comes early. Also, do whatever voodoo and pray to whatever you believe in for baby girl to flip if I really don't want to have a Cesarean.

The following few weeks were pretty low key. We really made a point to tie up some loose ends to be ready for her arrival, I had a baby shower with the girls from my part time job, and Brian and I worked on the Nursery. Otherwise, we went on with our lives as usual. Well, as usual as they can be when you're expecting.

On Easter weekend someone made a comment that she looked like she had dropped and I started paying a bit more attention. Sure enough, baby girl was lower, I could breathe better but also was peeing much more frequently. I stayed home for Marathon Monday and watched coverage while thinking how glad I was not to be running, but at the same time being inspired for when I do get back into things. I think it inspired our little girl too, maybe a little TOO much.

The following day I was feeling some constant period-like cramping and lower back pain. It wasn't like before so I didn't think much about it but called the doctor to be safe. They told me to call if it persisted. Wednesday morning I called back and they agreed I should come in considering I was still deemed "high risk". I wasn't any more dilated at that point but I was having contractions, so off to triage I went.

This time I was more prepared and had my hospital bag with me, knew where I was going, and generally felt better about things. I was one day shy of 34 weeks and knew that those extra 4 weeks were HUGE for her development so if this was it...this was it. I wasn't stressing, and meandered my way to where I needed to go. I lost my chapstick somewhere so I even stopped at the hospital gift shop to get more before going upstairs (Chapstick is a LIFESAVER when you cannot eat or drink for hours and hours...lesson learned during the first hospital stay when my sister saved the day by bringing me some).

In the 10 minutes it took me to drive from the doctor over to the hospital and get up to the floor, I had dilated 2 more centimeters, baby was still breech and Brian was being called to get on his way. I was oddly feeling relatively good even though labor was progressing. We spent the day and night in labor room (again) and the doctor had said if I dilated anymore that they were just going to take me back for surgery. We had a meeting with the NICU staff and were told the extra 4 weeks we got were good, but that she would still be admitted to the NICU if she came before 35 weeks. I was given steroids for her lungs again but this time I was not given the medication to stop labor- they were letting things take their course. My mom (who lives out of state for work at the moment) ended up getting on a flight because we were all pretty certain this was it.

It was oddly frustrating and relieving at the same time when things stalled out. Here I was again looking at a three day hospital stay with no baby (both times I was only "in labor" for a day but they keep you another 48 hours for medications and observation). But, the longer the stayed in the better she would be once she was born. Alas, I was sent home a few days later with no baby in hand and still little restrictions.

When I was discharged and we were told again that she really could still go full term. They also reminded us that making it until at least Thursday was important (35 weeks). In our minds, our goal was to make it to at least the following Monday. The upcoming weekend involved Heather, and lots of Brian's family members coming into town for my final baby shower, we agreed we obviously wanted to make it through all of that first.

You know what they say about the best laid plans....

I'll continue that story in another post, which is just as adventure filled but far more exciting. My third trimester challenged me in a lot of ways, I won't say that it didn't take it's toll on me. Anxiety and antepartum depression became very real(perhaps something worth writing about on it's own?). Those two hospital stays were mentally and physically exhausting (for both of us, I mean...sleeping on an uncomfortable chair next to my bed earns Brian some serious points). Last year when we were at the hospital we left without a baby in a far different situation but it was still very real and raw for us. So additional time there, lots of unknowns, and walking out without a baby again (yes, she was in my belly...but still) was harder than we imagined. As hard as this seven week stretch was for us, we got through it and were reminded how incredible our family and friends are. I cannot even list the amount of messages, meals, housecleaning, errands, visits, and everything else that we received- I'm still waist deep in thank you cards that I need to finish. It takes a village.