Let's see here, last I wrote was Hannah's birth story (when she was already two months old). I had a post all jazzed up about my maternity leave and life, the internet ate it (or I accidentally deleted it before it got posted) and I don't feel like re-writing it. The short of it is that I was off for 7 weeks and it wasn't long enough for baby snuggles and bonding but at the same time it was just long enough for my mind. Sitting in a house with a newborn is incredibly snuggly and lonely all at the same time. Netflix binges, yeah they're great...until you kill like 10 seasons of 5 different shows and leave an indent on one end of the couch where you are constantly sitting and milk-maiding. Being cooped up (even though busy with a newborn) was challenging, and if anything increased my anxiety. Going back to work was hard, but in some ways it actually made life a little easier for me, but we will get to that later. 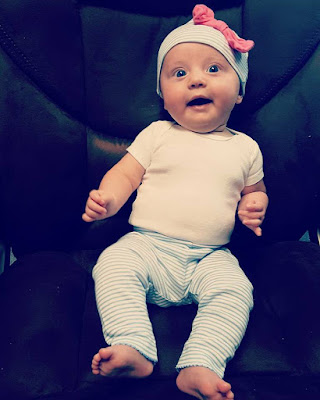 So here we are over four months into being a mom, and I'm getting the hang of things. By getting the hang of things I mean I basically figure things out and if I don't know I ask one of the many moms in my life and go from there. Some things came really easy to me and others feel like rocket science. Sometimes I use google, but that usually results in a meltdown about how Hannah is going to have a leg fall off or grow a second head. So, usually I just lean on people I trust. Can we just seriously talk about how I have NO idea how I would have done this mom thing as a teen, or early 20-something, or even how the hell I'm doing it now? Anyways, you get the idea. Momming is amazing and challenging all rolled into one and I wouldn't change it for a thing.

Unless someone knows how to train a lab or a pug to change diapers or at least empty the diaper genie...I would totally change some things if we could make that happen.

Back to reality though, which involved neither our lab or our pug changing diapers and they are probably sound asleep at home while I type this. I went back to work at 7 weeks postpartum, I'm incredibly lucky to have the time home that I did, and to have a flexible enough job where going back wasn't a TOTAL shock to the system, just 95%. I work 5 days a week at my day job and I also went back to the restaurant part time usually only one night a week though. It's not easy but it's good for all of us.

Things at home are good, crazy but good. I thought I had online shopping down before, and had no idea how much of a savior it would be with a baby. We used prime for a lot of things before, and now the biggest thing is subscribe & save (specifically 20% off diapers with it!). A friend also got me started on using Ebates, which has changed my shopping habits more but also made it even more helpful for me to do online instead of loading little miss up into the car for days on days of errands. We still shop once a week but it's much more streamlined and the rest of the stuff just shows up on my front porch for the mailman to get his strength training in.

Being a working mom so far has been fairly straight forward. Hannah has amazing childcare between family and friends, and usually it's just a matter of remembering where I have to take her each day and who is going to pick her up. With our work schedules, it's usually me who is on drop-off and pickup duty but Brian tackles other things that make life a lot easier. I thrive off routine and lists and being a mom has made that even stronger- give me ALL the lists, post it notes, and talking myself through the morning to make sure I don't forget anything. 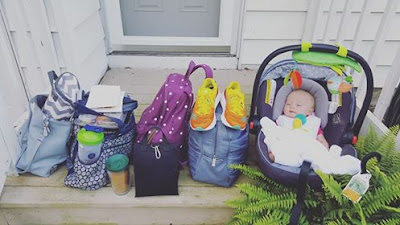 There has been a LOT of trial and error, but I think that comes with anything but especially being new parents. We are figuring out what works for us, and Hannah and all of us as a family.

Hannah is doing amazing, and is my favorite little person in the world. She is really coming into her own personality and changing so fast (I know everyone tells you it goes fast, but man...they aren't lying to you!). Being a preemie baby, she is a little behind on some things and has fell typically a week off schedule (based on the wonder weeks) but this isn't super concerning to anyone given her being a "35 weeker" and those schedules are for "full term" or "40 weekers". I still like the book though, and find it's a good reference.

Surprising to no one, she is a great eater like her mama. She nursed super well for a few weeks and then her reflux got the best of her (and all of our shirts, bedding, and carpets) and we realized that something had to give. She has been on zantac (per her pediatrician) and it helps wonders, on top of that I am exclusively pumping now and we use special bottles which help a ton (when she nurses she eats too fast which made reflux worse). Exclusively pumping is time consuming, but I love that it's an option (and one that I think is often underutilized), I have a great supply so it works for us. Fed is best, however she gets the food is A-OK by me. We supplemented with preemie formula the first few weeks(per her ped) to help her gain weight but she has been on straight breastmilk since about 4 or 5 weeks as she caught up pretty quick. Now here we are starting her on single grain oatmeal once a day (WHAT OMG TIME SLOW DOWN), again shocking to no one...she loves it.

Let's see here, she has been sleeping in her crib for about a month and a half now...she has amazing head control even being small, she hates pushups (I feel you babe, I really do), and she kicks like there is no tomorrow. We bought her a kick and play piano and smarty pants figured it out pretty fast that she kicks...it makes sounds and lights...it's an amazing tool for her to figure things out and for me to make dinner with less interruptions.

Loves: Clifford on TV, the book The Itsy Bitsy Spider, Ferdinand and The Little Engine that Could. We "read" her The going to bed book every night before bed (I know it by heart now so I more just say it to her while we get her ready), Ducky the pacifier, her baby recliner (Boppy lounger), all of the stupid noises and faces we make that you can think of, leaves and being outside, stroller runs or walks

Dislikes: Arthur on TV, The Magic Schoolbus book (leads to serious tears and screams), taking the boogers out of her nose, taking the bottle out of her mouth to burp her, sitting in her car seat without it moving(traffic jams are FUN and usually involve me singing random songs to her).

Overall she's doing great and doctors are happy with her progress. She needs some baby physical therapy (yes, it's a thing) for her neck/shoulder but it's just a minor thing right now and not a big deal in the grand scheme of things. Being her mom is one of the best things ever, I'm so tired and happy and amazed that she is mine.

While Hannah is rocking her first few months in the world, I'm doing my best to adjust to life as well. Postpartum hormones, anxiety and transitions are incredibly overwhelming and unpredictable. After a few weeks I could tell I was struggling a bit more than I originally thought and opened up with my doctor (which is really hard...because honestly I was so afraid to tell my doctor how I felt and her saying to take my kid away from me or something). Postpartum OCD is real, it's messy, but we are getting through it and I don't have issues talking about it. I won't let it be Voldemort, I won't make myself more afraid by not talking about it. I'm on Zoloft, I have amazing support, and I RUN. We are all happier, healthier and better taken care of this way. I truly do think going back to work helped immensely as I feel stronger mentally when I am productive and my days have a little more of a schedule to them. I hate the term "self care" but man do I have to make certain things a priority for me or everyone else will suffer to.

In all seriousness though, life is good. Messiness aside, we are figuring things out and soaking in every moment. This is a new phase of life and I'm loving it even when it's really hard. Our relationship has changed in so many ways, but that comes with shifting identities and roles. As much as I fell in love with Hannah when she was born, I also fell in love with Brian all over again watching him become a dad. Sue me for the cheesiness but man it's so true. I've also connected with some amazing women being a new mom, and lucky to have friends who understand life is different these days but they are just as amazing supportive and understanding as they would be otherwise.


Yeah, life is good. I love our family. 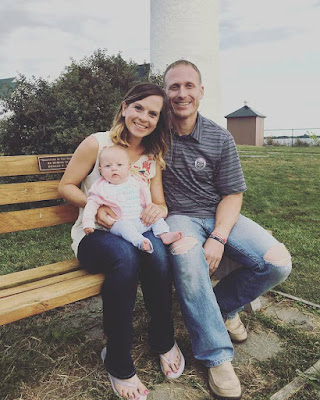