I've mentioned a few times on here that my family has a place up in the Thousand Islands region. It's not in an overly populated area (we are about 35 minutes from the super crowded touristy stuff) so there really aren't many races. This meant there wasn't any containment of my excitement when I saw that the small town (Cape Vincent) 5 miles from our cabin holds a 5k/10k race later in July. It meant an extra weekend at the cabin, but still could jump in a small race; the course also happens to be on my favorite route to run up there.

Originally I had convinced my parents to do the race, we would all make a fun weekend out of it. I then invited Heather to come spend time with us too, as she had been to the cabin last summer with me. Hollie was planning on joining us from NJ as well. Life happens and things changed and my parents as well as Hollie were unable to come up for the race. The weekend was still going to happen, Heather and I even convinced Meg to come with us after hanging out with her at Boilermaker the previous weekend.

So that was a super long intro to say I was excited to run a really pretty race, in an area I love with some good friends. Anyways....

The part of the weekend leading up to the race was about what you would expect for myself and two friends. Friday night after driving up there, we sat under a covered deck watching live music complete with burgers and brews. Saturday's theme was "if we want to start drinking we need to go run", which set the tone for the day. We ran, kayaked, swam, treasure hunted (pulled 20 golf balls out of the bay), drank beers, napped, and so on and so forth. It was what a summer day in the islands should be.

The second evening involved movies, cooking dinner, bourbon drinking sunset, goofing around with sparklers (Harry Potter spells getting thrown around), and curling up with the bedtime movie that is "Team America". You know you want to be friends with us.

Sunday came and so did the realization that we actually had to get our butts in gear. The race didn't start until 10 (that should be illegal), which meant a little easier going morning but also a much toastier race. We may have questioned the affect the extra nightcap of Woodford, but agreed- it didn't matter.

Out of the 3 of us, 0% of us would be "racing" the 10k. We had all raced Boilermaker the weekend before, and planned on using it as a workout or part of a long run. We each did long warm-up runs, and then meandered to the start of the race. I kind of checked people out at the start line, admittedly I knew that I could probably win the race even as a workout- but I also knew that if someone was near me it would be hard to hold back and NOT race.

The 5k and 10k started at the same time, so the first half mile was spent doing the whole "let it go" rendition in my head while the 5k runners took off speedy.  I focused on holding back while trying to figure out who was in the 5k and who was in the 10, praying someone went straight (10k) instead of turning for the 5k. Luckily about 6-7 guys continued on past the turnaround and I breathed a sigh of relief. I knew the course and it wasn't about getting lost, I just really didn't want to be in the lead and feel like I had to hold the race. I enjoyed the views that  I have ran by many times, and also savored the 10-15 seconds of shade whenever we went under tree cover.

When we got up to the lighthouse I smiled because it's one of my favorite places. Tibbett's point lighthouse marks where the St. Lawrence river meets Lake Ontario- and when you look across the water you see Canadian soil (and lots of windmills).
I took some water from a volunteer, drank some and dumped the rest on myself. After the turnaround I knew I would see Heather and Megan coming back at me. I waved my hands in the air like an idiot for about a minute while cheering for them. We were mimicking some Team America stuff from the night before, and confusing the other runners in the process.

By this point the residents along the lighthouse road realized there was a race and had come out and started cheering and watching the runners go by. I smiled and waved, while enjoying some "you go girl" comments. I passed 1 or 2 guys and then realized despite the heat, I was feeling good. My legs wanted to go. I stopped looking at my watch and just let myself run- as long as I wasn't pushing (I pinky promised I wouldn't push and race). Once we got back closer to town I started reeling in the rest of the guys, and wanted to try and catch 1-2 more. We made the final few turns, ran through a sprinkler, and then found myself on the tiny incline to the finish. I cruised around the corner and saw the time, knowing I had done what I wanted to do and also snagged a win.

First Female, 4th overall. The funny part is, had I actually raced it I could have won the whole shebang (The winning male was less than a minute ahead of me). But I know that a goal marathon paced workout was far more conducive to my training at this point. Not going to complain about a win(by 6 minutes) and a solid workout time coinciding though.

I found the rest of Team America and we got some water and stood there sweating buckets together. Eventually went off to run a few cool down miles to round out the long run for the day and come back for awards.

My name will be engraved on this super awesome lighthouse shaped trophy, probably for no one to ever see until the race next year (I'm assuming it sits in a closet somewhere all year). 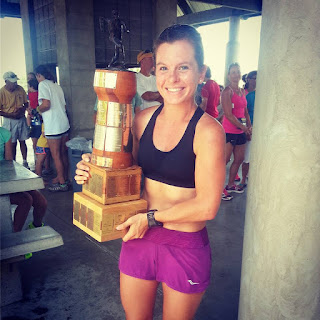 I did snag a beer mug with painted lighthouse on it which I loved. Too bad the moment water hit the paint it all came off- ruined beer mug and a sad face ensued. Oh well, we at least got one photo of it before it died prematurely. RIP beer mug.

Overall, obviously a fantastic weekend with friends. This was the first time I had ran this race, and will most likely keep doing it- even if just as part of a run. It was incredibly well done race, low entry fee, friendly people, decent water stops- and again...an extra excuse to spend a weekend at the cabin in the islands. My only gripe would be that it needs to start before 10 AM....it's July, after all.