This past weekend I pinned a bib on my singlet for the first time since Erie, albeit with much less internal pressure about a time goal. I had originally thought I would run Syracuse Festival of Races on Sunday, but due to logistics and it generally being a really busy time for me- it didn't make sense (it also would have meant breaking plans which I don't like to do). So I knew if I wanted to run I'd need a Saturday race to leave Sunday free for going down to Wineglass Marathon to spectate, as luck would have it there was a perfect race.

The Eastman House Photo Finish 5k was logistically what I needed. I wanted to get my butt back out there after Erie, and build a little running pep for Chicago next weekend. Close to home smaller race, good course, and all for wonderful causes (MANY charities benefit from this race).

Saturday morning I was a bit slow moving getting ready, and walked right out the door without my racing flats. That pretty much just says how little I cared about the actual race (normally I get EVERYTHING ready the night before). I realized I forgot them when I was almost there, and it was a pretty nonchalant "meh" while sitting at a stop light.

It was cold, but admittedly I love that kind of weather for races. I bundled up and did a few miles before the race then stripped down for some strides at the start line. I felt good but really had no idea how the race would go, and my only plan was to not stare at my watch the whole time. 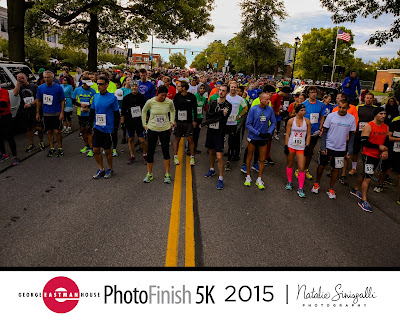 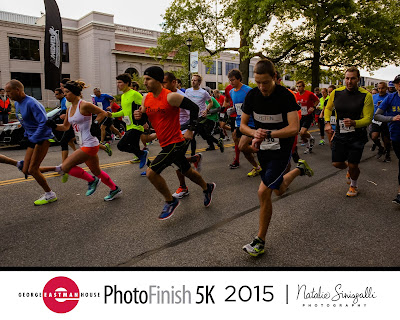 We started and I instantly went out too fast (I can drill a marathon pace in my head but 5k's, not so much). Slowed down about half mile in and held that to cross the first mile in 6:06. I knew I was gonna back off a bit (not necessarily by choice, ha!) and just rolled with it. Second mile was uneventful and I was just keeping the lead guys in my line of sight, I was lead female and hoped holding on to the guys might help keep me there. Mile 2 was 6:18 (read: how not to pace a 5k), but I felt decent so my goal  was to try pick it up for the last mile.
We ran on East ave past the front of the Eastman house so there were some more spectators which gave me a good boost and helped me pick it up. Made the final few turns and went back and forth with a few guys. I turned onto the Eastman property and saw the clock was at 18:5X which made me happy because I really wasn't sure what I was at. I finished in 19:07, which is technically my second fastest 5k behind Bergen in August. I don't regret not staring at my watch, but I do think I could have dipped under 19 again had I actually known where I was at a little sooner. But, again it wasn't a goal race. 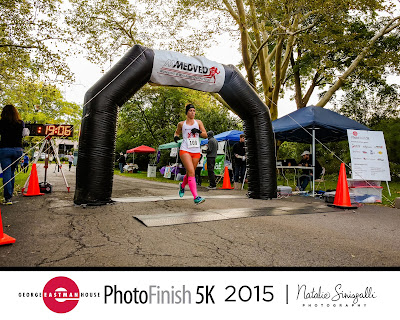 Much like Erie told me about other distances (basically, I have a lot of room for improvement in half marathon and down), this just reinforced that. I love marathons but I do have a strong desire to work on some other distances as well. Although, I don't see myself drifting too far from the distance- mainly I'd like to see some big drops in my half and 10k times. 5k is great but I just don't enjoy them the way that I do some of the longer stuff(everyone has their preferences!). Once in a while it is good to get out there and do them though, and I plan on a few this fall after Chicago.

I cooled down with a friend, and then a little more solo before waiting for awards. As first female I won a book, museum tickets (to the Eastman house), and also $100 donation to the charity of choice in my name. I chose KMB for answers. I have talked about this non-profit a little bit before, but it has grown a ton since then. It was founded by friends/family members of a girl with whom I went to high school with. They are doing wonderful things gaining support and raising awareness about eating disorders. If you have a minute, please take the time to hop over to their website or Facebook page and see what they are all about.

Next race, CHICAGO MARATHON!!! I am really excited for this upcoming weekend with Brittany and the rest of the Saucony 26 strong ladies!