One of the biggest pieces I left out while talking about the incredible weekend in Chicago, was obviously the race. It feels very different to write up a recap for this marathon. Sure, I DID run a marathon- my thirteenth to be exact, but this wasn't "my" marathon to recap. It was quite a bit of "ours" but mainly "hers"(Britt).

While the marathon thing isn't new to me, this was the first time I would run Chicago and also the first time going into a race without my own personal goals. My goals all had to do with Britt- helping her achieve marathoner status, and hopefully enjoy it along the way. As the weekend came, I was really glad that I had decided to do my goal race before this, it allowed me to be totally present in Chicago and not worrying about what was next.

The morning started with a walk to the park with the rest of the ladies, some photos at the Bean and obviously a selfie or two along the way. All of the cadets were calm, collected and I could tell we were all just excited to be ready to go! 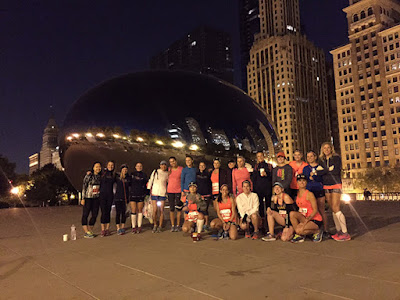 Things were pretty well organized around the start (gear check, bathrooms, corrals, etc.) so we maneuvered through with relative ease. Once we were in the start corral we ran into some of the other ladies and exchanged good lucks and also some "You are NOT a chicken" (had to be there...).
The first few miles were just, different. But in such a good way. I wasn't stressed, I wasn't even worried about Britt taking off like a bat out of hell and trying to slow her down. Did we go out a little faster than planned, yes but not much. We looked around, commented about all of the people, and just smiled our way through the city buildings.

We knew we would see Ashley, my Mom and hopefully a few others within the first 3 miles. Sure enough, I saw Ashley (with her husband and Jennie in tow) and yelled her name with a smile and wave. A little while later we crossed a bridge, and oh there's Mom! We both got excited, and then joked that in about 30 seconds there would probably be a video of us screaming on facebook. We were wrong, but she did get some good pictures:) 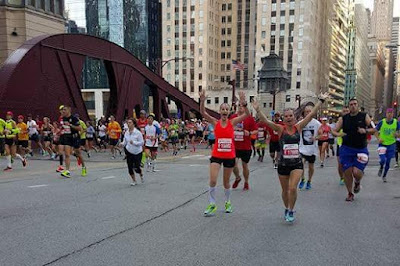 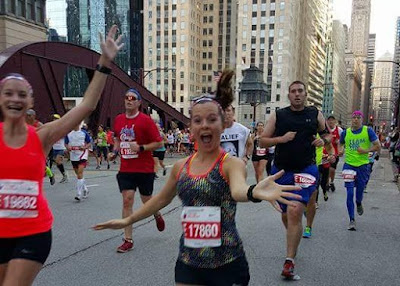 The miles ticked away pretty quickly, we focused on puppies (yes, I'm serious) and reading funny signs. We sang when we heard songs on course that we knew, and simultaneously did dances that weren't even planned. 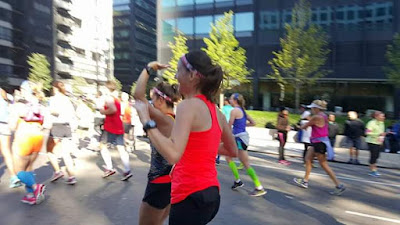 We watched for people we knew, sometimes we saw them and sometimes we didn't. We saw Jenny a few times which was a great- so glad we finally got to meet in person! We saw Grayson, one of our amazing Saucony leaders and her ladybug balloon overhead. Before we knew it we were looping back through for the half, and got another fun Mom sighting to boot. Still smiling away.

Miles 13-16 were pretty much on point with the first 13, but admittedly it was warming up and we knew that anything can happen that second half. Britt took a bathroom stop, I used this as a good chance to stretch. My left Achilles was a little tight and it needed a little TLC, the paces were pretty unfamiliar to me so my body was adjusting and stretching did wonders.

After that bathroom stop mile, we got right back down to business. We continued with alternating water/Gatorade every other mile. We were both using Honey Stinger energy chews for fuel, which worked really well and paired that up with water stops. I also took two Hammer Endurolytes mid-race as I knew it would be helpful with the rising temperatures.

I could tell the later miles were wearing on Britt(It's expected as she was entering new territory!), but she was doing an awesome job keeping her head up. We still had mid-run dance parties when a good song played, she commented on how fast some of the miles were going by mentally, and we still got excited pointing out all the dogs on the course {can you tell we are dog mom's?}.

We celebrated little victories along the way, which is always a good thing to help keep you positive. After this mile, only single digit miles left! Or, hey here comes mile 20- the furthest you've ever run! Quite a few "Can I get a hell yeah?!" every time we hit 21, 22, 23 and so on- new mileage PR's for her. I tried to remind her of the amazing things that she's got to look forward to (BEER, Buffalo Bills Football, Team celebration dinner, BEER) at the finish.

We would hit a mile, and I told her "hey 5 miles, how many times have you ran 5 miles- that's nothing!". I tried to give her the right amount of encouragement without being overbearing, hopefully something I accomplished. We took walk breaks for water, and stretch breaks as needed. Setting little goals to keep going, "okay when we get to that green sign, we go". She kept trucking on, and not once questioning that finish line.

When we were in the final mile I could see it on her face, that sense of "this is happening". It made me so happy, and I think we were both more emotional than we led on at the time. I heard my name yelled loud and cranked my whole body around to see my friend Mark whom I met in O'hare last year while we were both stuck for flight delays. It was a great boost at the end, and of course sped me up a bit. I think this happened a few times, we would see someone and I'd get excited then Britt would pull back on my reins. Sorry for that, I just love people cheering for us! :)

We made the right turn to go up the "hill" and chuckled as this would normally be a speed bump for us upstate NY girls. Then there was a 400m to go sign and we both noted the fact that in the distance of ONE lap around a track we would be done! With 300m to go, all of a sudden Britt took off. She found that final gear and left me in the dust, I chased her down weaving through everyone and we crossed the finish line side by side. In fact, our times are identical! I love our finish photo, it shows how happy I was for her and her emotional "this is real" face. 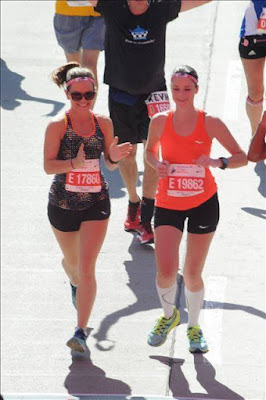 She did it, she became a marathoner on October 11, 2015 and I got to witness the entire thing. In all honesty I think I'll remember more about HER first marathon than I do my own. I know I get emotional just thinking about it!

All in all Chicago marathon was everything I was told it would be. The course is pretty dang flat (Erie is definitely flatter, if you are interested), the course was scenic and entertaining. There were lots of crowds, the bridges with carpets rolled out was cool (I love Bridges!), the neighborhoods were electric and finish views were fantastic. I admittedly still think Boston is a little louder and rowdier though, Chicago put up a good fight- but it's really hard to battle the sounds of the Wellesley women and Boston college partiers. It was great to knock another marathon major off the list and obviously experience it in an unforgettable way with a great friend.

So, Chicago was my 13th marathon. Lucky 13, and I truly feel like I was lucky. I had great chance to support Brittany, represent two power companies in the industry, and spend the weekend with many other amazing and inspiring women. Lucky 13, yup..lucky indeed.