Rewind to Boston 2014
Because of the lackluster training cycle (from my semi injury--basically a nagging soleus), and the personal hurricane in my life- Boston was a run and not a true goal race. I went into it with no real goals other than to just enjoy the race, the experience and smile as much as possible. If I felt great and ran faster, awesome. If I felt like crap and slowed down, that's cool too. That morning when asked what I thought I was going to run- I said 3:20 given my training. I ran a 3:20. I'm pretty good at knowing my body and what it's capable of on a good day, sometimes I underestimate it but sometimes I'm spot on. {I try very hard not to overestimate my abilities because that led to some serious upsets early on in my running days} 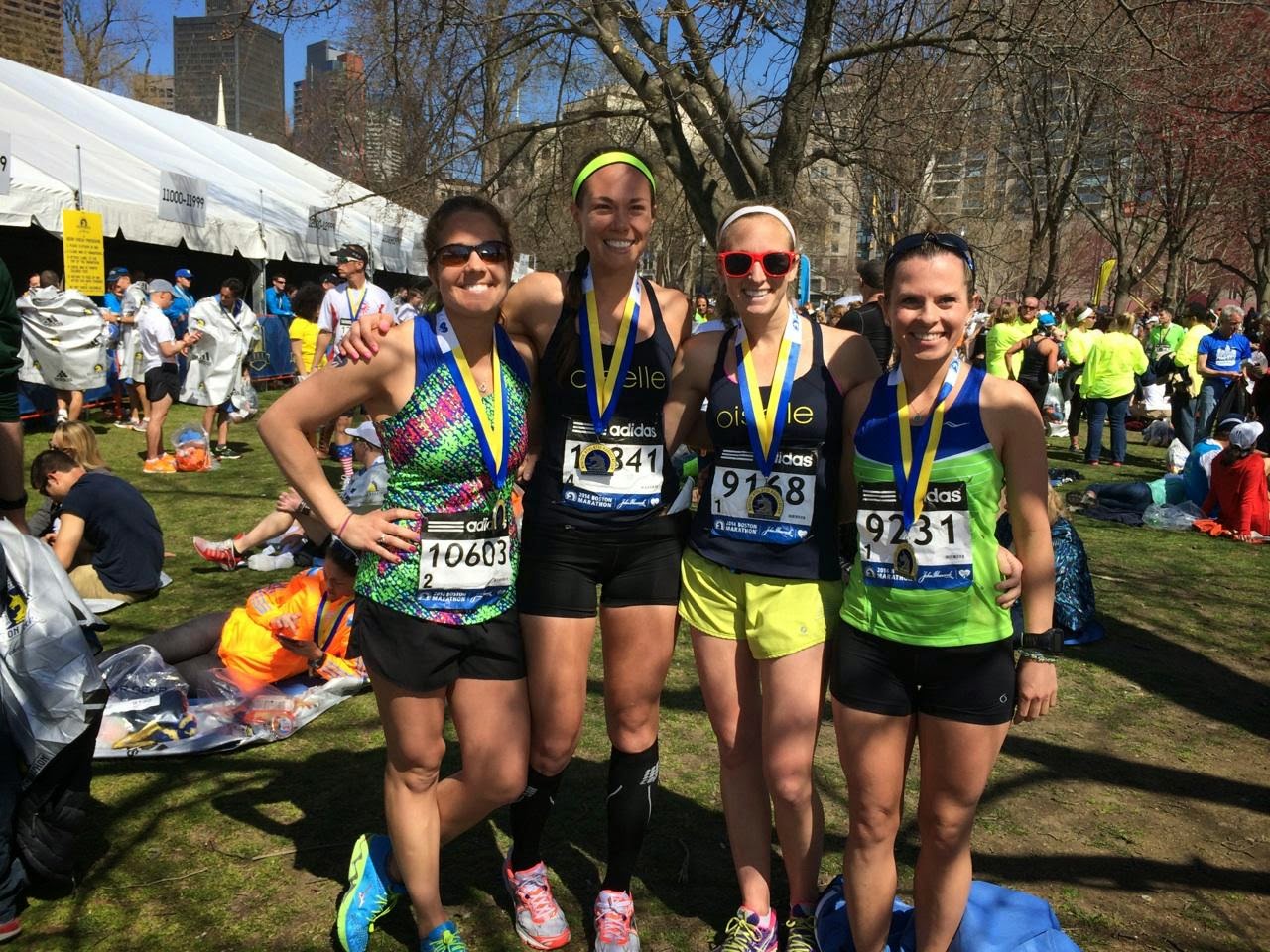 Boston 2015
This year, while only a year later- feels like a different world to me. I'm not going to Boston for just the experience, I'm going to race. I've been working my ass off {like everyone else}, and know that even though Boston is a tough course- a PR is possible.

While race strategy isn't solidified yet, some things I do know.

I know that I'll start conservatively and not kill myself on the downhills.

I know I will focus on being relaxed and not letting my form get sloppy (which, I tend to do).

I know that I will embrace the crowd. The high fives. The kids. The kisses. BOSTON.

I know that I will be chugging up the Newton Hills, keeping my head up and effort consistent.

I know that I will do everything I can to come into those last few miles like a runaway freight train.

Those are the things that I can control, and I will do everything I can to stay true to that.  Although I might spend the weekend looking up witchcraft to figure out how to turn the predicted 21-mph wind direction around. If the wind doesn't switch, a note to any tall men near me at the start: pardon me for tagging along behind you. We will file that under, huge perks of being short.
________________________

Now I'll bring up the elephant in the room. You know, the circus elephant sitting in the corner wearing a shirt that says Sub-3. Yeah, that one.

While that is something I have thought about for a while, it was always a 'long term' kind of goal. As much as I am a "dive right in" kind of person, there are other things I prefer to take a little slower or reel in over time. I call that a healthy fear of bonking hard/failing.

After Memphis, that sub-3 goal turned into an elephant that sat next to me anytime I started talking about another marathon with someone. With the finish of that race I was less than 5 minutes from a marathon time starting with a two. I have had so many people encouraging me for working towards it, and also those realists with the kind reminders that there is still a big difference between 3:04 and 2:59. Neither of those types of people are wrong. I truly believe it is something I am capable of, but I also know it's gonna take work to get there. It's not just a gimme.

Yes, it's on my mind and I know that it's coming. Maybe it happens at Boston if I have a great day (I won't rule it out), maybe it happens in the fall on a less challenging course. Maybe it doesn't happen for a few years- and that's OK. I don't plan on quitting running marathons before, or after running a sub-3 hour time.

I love having a big goal to chase, it drives me every single day. After qualifying for Boston the first time, I floundered a bit- well what now? I'm not a pro runner, I'll never make a living off of this, BUT I can embrace my passion and continue to push myself to be a better person and runner. Some days that won't be chasing times at all, but for right now I'm chasing a time starting with 2. My life right now allows me to make that a priority- that's a decision I have the right to make for myself.

Like any race, there is so much that is out of our control. In the mean time I will obsess about all the things I CAN control. Like the 10 outfits packed. Like the mass amounts of food I will inhale this weekend. Like pushing away any negativity, and embracing the positive (awesome) things that this weekend will bring.

So on Monday, Marathon Monday, Patriots day, the 20th of April- I WILL be competing. I will be competing against the clock, and against myself. As for the goal, I simply plan on using the mantra that got me through Memphis....Just hold on like hell.