When I decided to do the Freezeroo series this year, I knew that it would be a good thing in many ways. Some would be workouts, some would be races, and more likely than not- some wouldn't happen. I skipped the race on New Years day (which I planned all along) to focus on other things. Out of 6 races, your best 4 count for points so that gave me some wiggle room. They weren't perfect, some were better than others, and Upstate NY winter weather only kept one from not happening all together.

{I decided after the first one that I wouldn't recap them each individually because they weren't individual goals for me. My goal was to look at the series as a whole, and as a stepping stone in training for Boston.}

Pineway Ponds 5 Miler (January)
This weekend was less about the race and more about the fact that Heather and Britt were coming out to stay for the night. I had some quality time with Heather in the fall, but it had been a few weeks...and I hadn't seen Britt since CHICAGO! Of course, we had a fun night out Friday which involved beers and burgers.
Race morning was decent weather wise, considering it was January and a Freezeroo race. There was a good amount of wind but certainly could have been worse. I went into it knowing I could PR and potentially win, but wanted to focus on just running hard. I've gotten so much better about not being a slave to my watch, and simply just going out and running. I ended up with a 31:10 which was a little under a minute PR, and also the win which was my second for the series this season. After the race, we cooled down and then walked to a nearby diner for breakfast- I love that my friends share the same love of running and coffee as me.

Hearnish "10kish" Race (January)
This race is one I didn't go into with a lot of expectation. It's a recently changed course, with lots of hills and turns. To top it off, it's not even a set distance. For some reason I felt off all morning, including lead legs during warm-up. No idea what it was but I still gave the race a good effort. I ran the first mile or so with another female, we even chatted a little bit which was a good distraction from hills. Around mile 2 she started to pull away, and damn I just didn't have it in me to go with her(Go Amy!). I kept her in the distance and used it as motivation to keep me pushing, I also saw some friends on the out and back portions which helped pass the time and give me reason to smile/high five.
I refused to look at my watch, because I figured ignorance is bliss. I didn't want to know what I was running because it could have only frustrated me, even though I didn't know I wasn't running THAT far off pace (it just felt like it). I finished with 6.35 miles in 40:42. The funny part was, that is technically a 10k PR even with the long distance and not feeling great. I finished in second about 30 seconds behind the female winner, which still left me in good series standing.

Valentines 8 Mile Race (Feburary)-- CANCELLED
The town encouraged the GRTC to cancel the race because of the predicted severe weather. It was 20 below zero with the wind, and those winds....were over 20mph with snow. Honestly, I wasn't mad that it was cancelled in fact I was relieved. I'm all about pushing limits and sometimes running in extreme weather for training (never know what race will be!) but some conditions are just stupid.

I ended up still running the "race" on the treadmill by myself at the gym. No, it doesn't officially count for anything but I'm proud that I was able to get it done. I ran it with a 3 mile warm-up and cool down, for a 14 mile day. The 8 mile portion was run in 50:52 which I was really happy with.

I spent the rest of the day geeking out on the Olympic Trials Marathon on TV. I could write a post on that whole thing alone, but I won't. Salty Running had some amazing coverage of the trials, pre and post race which really inspired me. Two of our writers were even out there for coverage on race day, read about the pre-race from their perspective, coverage for at home viewers, and some stories of those runners behind the lead pack. There was so many thought provoking moments from that weekend. Kara's post-race interview- I could easily sway both sides on that one(she ran an incredible race, and she's human). What really got me (as the numbers nerd) was the statistics behind the qualifiers, I wrote about that in detail over on SR: Does How a Runner Qualifies for the Trials Matter? Don't forget all the rage floating around the web about the poor treatment of the trials athletes, they deserved better if you ask me.

Edge of the World 10k/Series Finale (February)
For me, this was the most important race of the series. My 10k PR was technically still 41:20 from 2013, unless we count the unofficial 40:42 from the Hearnish. I have broken the PR so many times in workouts and such since, but not in a race setting. I REALLY wanted to nail a big PR and sub-40 for the first time.

Add in the extra motivation to run hard and win, which would secure the overall series title for myself. Yeah, I wanted it all that day and was willing to push hard to get it. I took off quick, and hoped that an early push of the pace would set the tone for the remaining miles. My first 3 miles were under 6:07. I hit the 5k mark in 18:55 which is only 10 seconds slower than my PR! At first a freaked, like oh shit you shouldn't PR a 5k in the middle of a 10k! But, I also remembered that I have done a lot of strong speedwork and really could do both. The wind on miles 4 and 5 slowed me down significantly. I didn't have anyone around me really, add in a slight incline and that headwind really won. I slowed to 6:20/6:28 for those two miles, which I was mentally prepared for because the wind in this race 2 years ago caused the same problem. I didn't look at my watch so I wouldn't get frustrated with the pace. I just kept pushing forward, not knowing where any other females were and hoping I could just hold anyone off. My final mile was back down to 6:04 with a strong finishing kick thereafter. 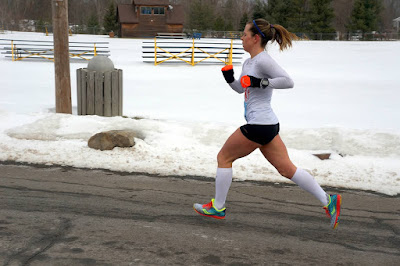 38:37 was the official time which is over a 2 minute PR anyway that you slice it, I also held off for the win which secured my overall series standings. I stood at the finish line cheering in runners for a few minutes before starting my long cool down for a 16 mile day. I had company from another runner on my cool down, which certainly made the extra miles pass quicker (almost too much though...we missed most of the awards ceremony without realizing!).

Thoughts
Overall I am really pleased with how the series went. Sure, some might say "well of course you are, you won". Honestly my level of happiness doesn't have much to do with that at all. I ran hard, I got out in different weather conditions, I spent time with other runners (I train solo 95% of the time) and made some new friends. I also set a 10k PR twice, as well as a 5 mile PR twice (my second 10k PR also included a PR for the 5 mile split). I mean, the personal victories combined with the social and training aspects I went in search of for the series are better than any prize.