This race was a week and a half ago now, sorry for the delay. I'll blame it on training, life, work, weekend away, and ALL the food. Because, well..that's life.

I decided right after Lake Effect that I was going to do this race as a tune-up for Boston (good timing for it, a month out from the race). I knew a lot of people doing it, which meant I would get to see some friends who I don't see often, and run too...win-win.
Shortly after registering, my 'injury' started getting to be a problem. My goal of a faster time slipped away a little but I also knew I could use the race as a good workout.

That morning was one of the most stressful race mornings- woke up, prepared for the 90 minute drive....only to find that it snowed...again. The roads were covered, and it was crazy windy creating poor visibility(in the already pitch black of early morning. I white-knuckled it the whole ride and considered turning around many times.

Somehow I managed to still get there on time and get everything taken care of pre-race.  I have to say, had the logistics of the race not been as good as they were...this wouldn't have happened. I was able to park right around the corner from the Oncenter convention center (where expo was, as well as start and finish line). I got inside, grabbed my bib, checked my bag, ran around the whole convention center looking for shortest bathroom line, and got outside for start without ANY issues. Everything was so close and centrally located...I have to give them an A+ for that.

I decided going into it that I needed to throw out my original goals, the roads were slick and the conditions were far from ideal. My only real goal was to stay upright and finish. In my head thoguh I really wanted to keep it under my current marathon pace (1:36ish), but I knew between injury and weather conditions- might not be in my control.

The course itself is fair, LOTS of turns, a few rollers but nothing crazy (worst part is mile 2). The course was well marked, although most of us were not running inside the cones (it was safer running in the tire tracks from cars because there was less snow).
I was actually surprised at the people cheering along the course, much more than I expected for a snowy cold Sunday morning in Syracuse. The only part of the course I really disliked was the 'Creekwalk' section. It's a sidewalk by the creek (imagine that!) but it wasn't plowed or cleared. I almost fell multiple times through here and I heard others complaining about it afterwards as well. Granted- that section probably would have been nice, had it not been the section I looked like I was trying to be an ice dancer. 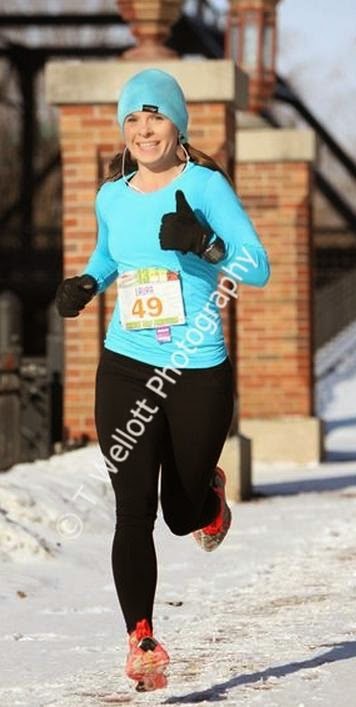 As for my paces, well these are the splits from the race timing company. I never felt fabulous but I never felt like dying either. I managed to pull negative splits for the first 15k, but after that I was just toast. C'est la vie.

I finished in 1:33:05 (7:06 average) which is 3 minutes slower than my PR but still a solid time. Anytime I can run around that pace for a half, fine by me. I used to dream of a time like that- and now that's my 'bad day', we call that PROGRESS.

One of the best parts of the day was getting to see friends--Carrie, Joe, Thomas & Family, and of course Heather! Heather and I hung out after the race for a while, and then she kindly let me be a bum and shower at her office gym (I had a birthday party to go to in the area after the race).

I really can't say anything bad about the race- it was incredibly well run. As I said the logistics were awesome, the course was fair, chip timing, big pre-post race warm area (in the convention center), lots of food and drinks post-race, and the medals were nice too. I see this becoming a bigger race in the next few years (this was only the second time the race was done and it's already a good sized race). For a 'new' race, they really know what they are doing and it's nice to see good quality races in the area. Obviously can't blame the race for the weather- I mean, it's March in Upstate NY....could be 80 degrees and it could be below 0. I will certainly do this one again, maybe next year the weather gods will be a little nicer?


Anyone else run Syracuse Half this year?

Seeing as it is April 1st, I'll ask---who did you prank? Or were you the victim?