I'm actually going to recap a 5k, WHAT.  Me and 5k's haven't been friends this year- at all. Maybe it's because I have been focusing so much on distance, but the idea of a 20 minute or less race should excite me more than it does. Hello 5k pain-train.

I actually got excited for this race though. I've run it before a few times(3 times), I knew I would see friends, I knew that the weather was going to be good, and more than anything I would be running on fresh legs. Recovery after Rochester has been really good. I took time off, I did some easy running and then did 2 shorter workouts the week before this 5k. Nothing like low miles and extra rest for some pep in your step.

The goal for this race wasn't a PR, the goal (for me) was to feel good, strong and controlled. If I am being honest, I haven't had a good feeling race since the spring- perhaps even before that. Yes, that even includes my half PR from May and Marathon PR from a few weeks ago- neither of them felt 'stellar'. So I wanted to smile, enjoy it, push and genuinely feel good about racing again.

The morning was perfect- 40's with sunshine. Nothing like crisp fall air for a good race. It's only a 15 minute drive to the race in Fairport which made the morning go smoothly. I got there, warmed up for about 15 minutes with my friend Joe and then changed and made my way to the start. I did my strides as planned, and noted that my legs felt loose even with the chill in the air. I got into a fast but not too fast groove right off the bat, this is a small race which allows you to find your stride easier/sooner.

First mile has a few turns but nothing too bad. There was a guy yelling splits at the first mile......"5:45...5:46" I looked down and my watch said 1 mile...6:13. Obviously this man started his watch late- I'm so glad I decided to wear my watch (I considered running watchless for less pressure), I would have been pissed if I went out that fast (one day I know I can make a sub-6 pace for a 5k, but that day is not now). Anyways...

I passed 2 girls shortly after the first mile which put me in 3rd place. I made it my goal not to let any girl pass me back- top 3 are in the money, and let's be honest I wanted to place well. After the hairpin turn (mile 1.5?) I tried picking it up a bit but not crazy. I passed the second place girl around mile 2, and then kept my eyes on my guy friends I could see ahead of me a bit.

Felt good the last stretch and pushed but didn't kill myself. 2nd place female and a 19:36, coming in 3 seconds ahead of coaches goal. I had gas left in the tank but felt really good, and it gave me a confidence boost for the half next weekend. We are using Empire State Half Marathon as a baseline for the rest of training between now and Memphis Marathon, so it's going to be a good test. 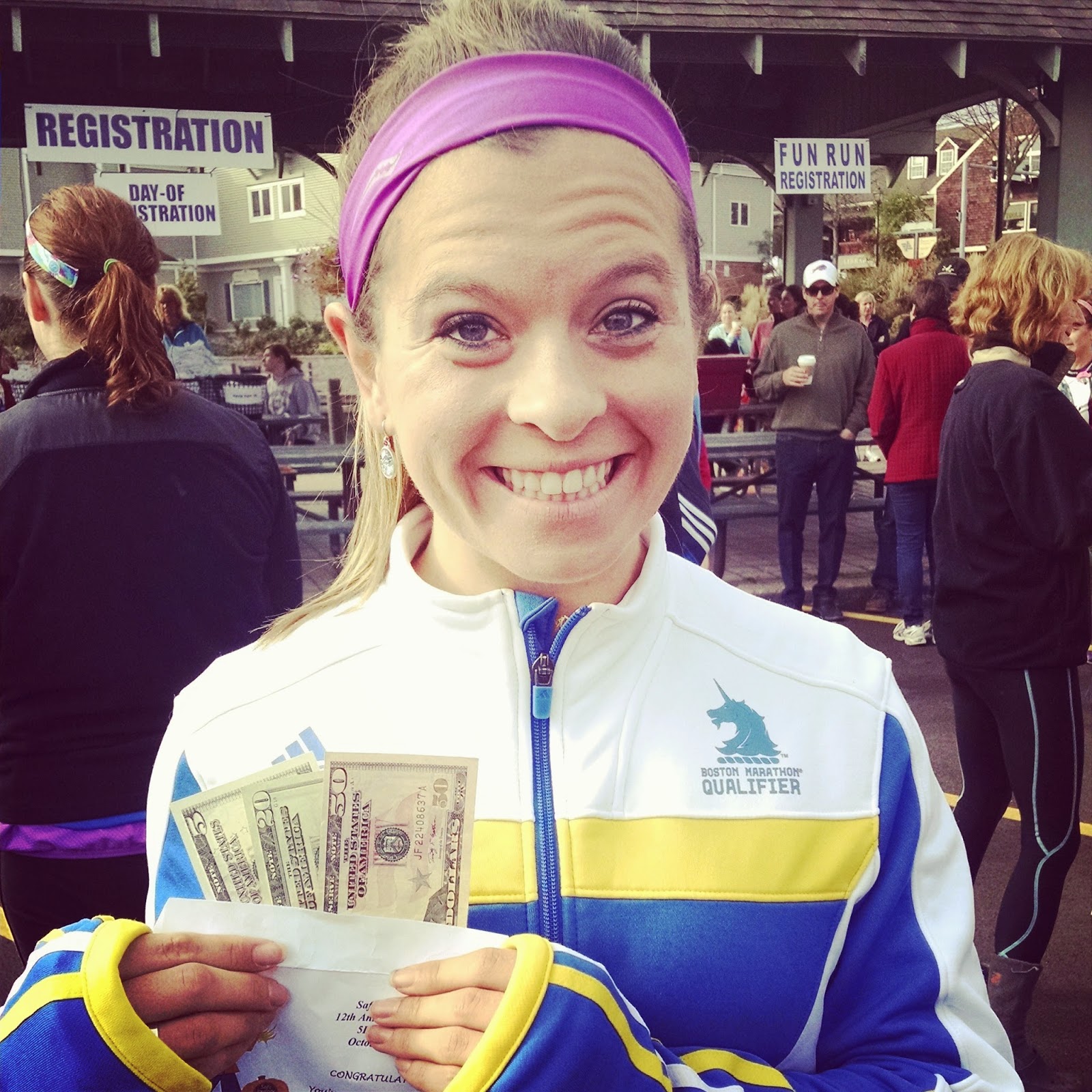 After the race, I chatted with friends and then did a cool down with Joe while we waited for awards. $75 for 19 minutes of work, I'll take it.

This race is in support of local programs that assist those affected by domestic violence. They had enough balloons there for the race, to account for 20% of the women in the field of runners. They did this because 20% of women will be affected by domestic violence in their lifetime. That number is stupid high and it needs to change. It's not an easy thing for people to talk about, but those are the things we NEED to be talking about. It's been on the news a lot lately, unfortunately involving some well known people (NFL players). Don't be afraid to talk about it, or reach out for help. Rochester has a few programs to help others, look and see if your city has them too. You can use the resources or help others in need. 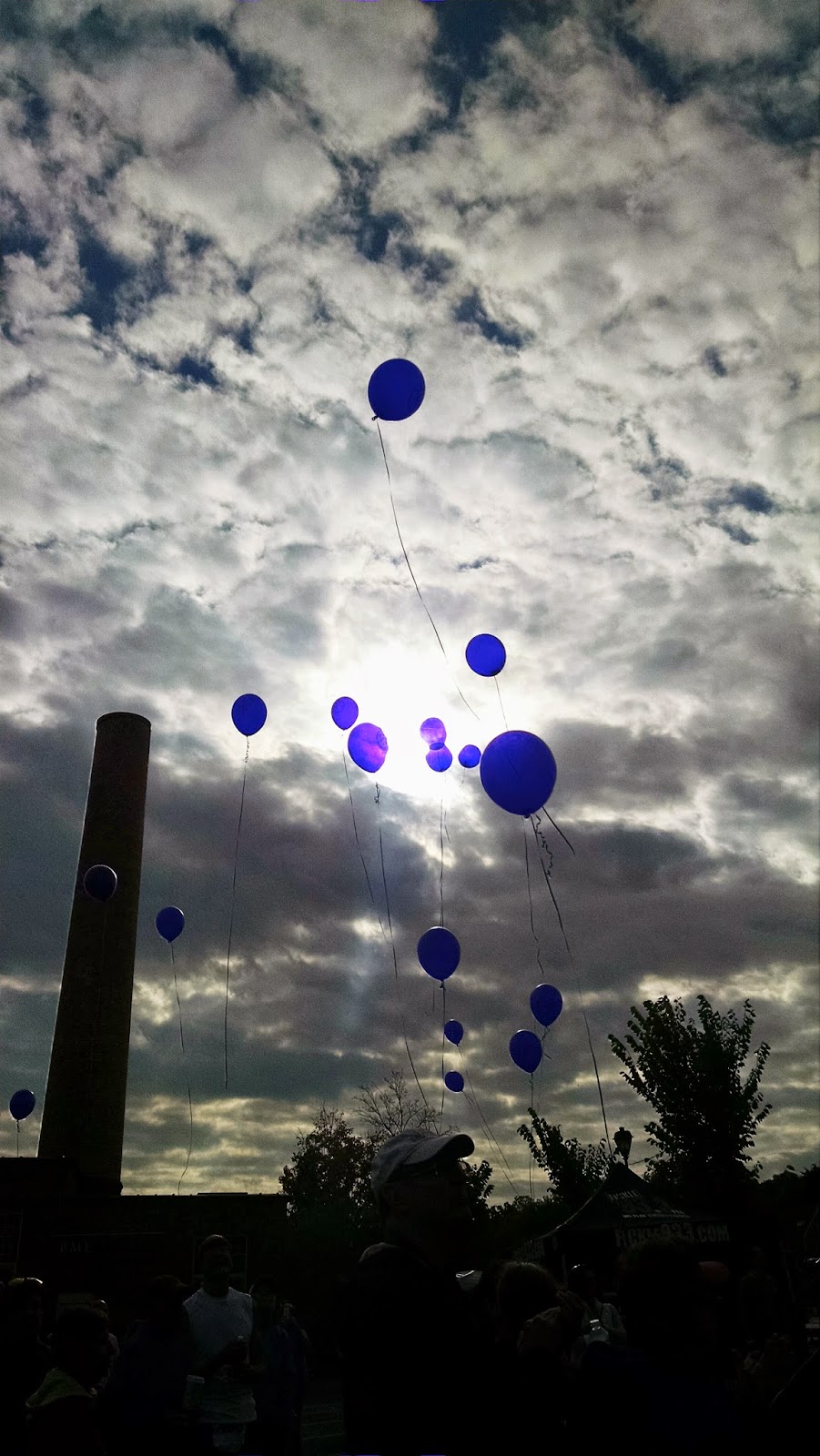 Overall I got exactly what I wanted/needed from this race. I walked away with confidence in my racing abilities, and general happiness about running. This is great timing to feel that way heading into an important half next weekend and less than 2 months out from my next marathon. The mind is a powerful thing- don't ever doubt that. The consistency in my running/training has been there for months now- but getting my mental game on a consistent level needs some work. Here we go!