A few weeks ago I decided to take a final pre-summer stab at a 5k PR. I knew that I wanted to push and see what could happen even if I wasn't running on fresh legs. I also had a volunteer (Eric) to run with me, keep my watch, and allow me to just focus on hanging in there. It was the perfect plan, of course we all know how perfect plans lay out :)

Race morning was easy. I got picked up, ate in the car on the way to the race and then did a solo warm-up run. I noticed my quads were feeling heavy but hoped that it would shake out quickly. The race took place at Mendon Ponds Park, which I am familiar with- I knew it wouldn't be super flat course but I also knew it wasn't on the hilliest section of the park. I still felt confident heading to the start. 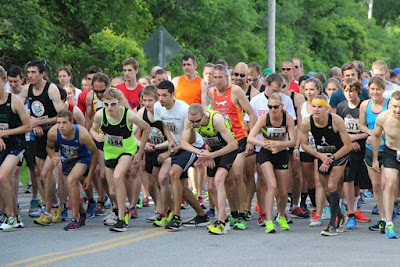 I passed off my watch, and stood at the start line- I'm pretty sure I tapped an imaginary start button on my wrist when the gun went off out of habit and muscle memory.

The first mile was fast, downhill and with a decent crowd still. 6:05. PERFECT.

The second mile we made a turn and hit the turnaround a little later (out and back course). 6:04. Yeahhhhh buddy. 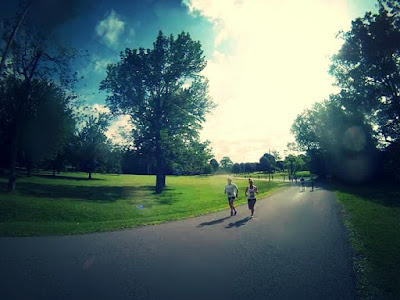 It was all good and PR pacing, until it wasn't. Slowly Eric started getting further in front of me, he motioned to get me to pull ahead and my legs just wouldn't oblige. We caught up to Joe, I hoped that would help me push along- but legs still said no. I knew that I needed to figure something out, because we were about to head up that nice hill we came down in the first mile.

It's a good thing I didn't have my watch and didn't know how slow I was going at the end. I tried, legs still wouldn't go- I was feeling the effects of training. I ran the last 1+ mile (course was long but it didn't matter, wouldn't have changed much) around 6:45 pace. Basically, how NOT to run a 5k :) 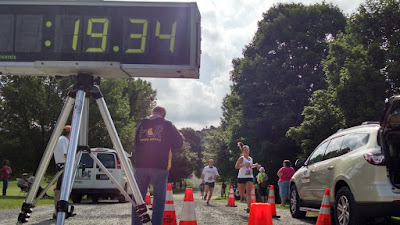 I admit I was MAD at the finish. I kicked rocks for a few minutes and then cooled down. In the end, I'm okay with it and moved on. This wasn't a goal race originally- it was a "there's a 5k for a good cause on a day I can actually race, lets take a stab at a PR". I wasn't tapered, in fact I ran 5 x 1 mile repeats a few days prior. This isn't me blaming improper training, this is my realization that my eye is on the bigger prize. My marathon goals in September are forming the placement of training right now, not a random 5k. I got frustrated and I got over it- my usual MO with dealing with things. I try not to dwell on stuff like I used to, I'm much happier for that.

The positives: I got to run an inaugural race in honor of a local runner, whom many of my friends were lucky enough to know (I didn't know him, but heard some great stories!). I was lucky enough to have Eric run with me, and even let me beat him at the end (mark it down as the only time I'll ever beat him). I spent the morning outside, in a beautiful park with a bunch of runners. I got a hard effort run in, 2 miles strung together at 6:04,6:05 is something I couldn't do years ago- now I just need to figure out how to add a third ;)

I have such a love hate relationship with 5k's. They're finicky, and the littlest thing can make the biggest difference. It's "only" a 3.1 mile race, so if one section of it is off- it's not like you have a few miles to make up ground as in distance races. Maybe this is also why I am able to move past 5k's a lot easier. They're so hit or miss, and its all over and done with pretty quick (although, it hurts the whole time). You're off by 30 seconds in a 5k and it's a HUGE deal, 30 seconds in a marathon is basically one less Garmin glance per mile. For me, the shorter the race the easier it is to move past it (bad, or good).

I won't race a 5k again until August- Bergen 5k which is also the USATF Niagara Championship, if you live in Upstate NY you should definitely be there August 8th! :)

For the record, I'd still rather run a marathon than a 5k any day- but since bodies recover just a smidge faster from a 3 mile race, I'll stick to a good balance of both throughout the year ;)
Posted by Unknown at 4:00 PM