Oh look it's another race recap! Sixth weekend in a row of racing to be exact, so not the norm for me but it's been fun! I knew this would be my last race before Philly half in two weeks though, and also know it would be a good confidence booster if it went well. I didn't go in planning on a PR, but I also didn't rule it out. I have been consistently between 18:55-19:07 for a while now so I was hoping to be somewhere around there.

B got up in the morning with me and drove me to the race, which is an easy drive. I warmed up solo and zoned out to some music (I may not listen to it while racing anymore, but I still love it for pumping myself up during pre-race!). I couldn't gauge how I was feeling, but finished with some strides and checked out the field anyways. Based on who I saw, I told B I could have a tough time cracking the top 10 but that I would try. A quick shoe change and last minute hug and it was about go time. I high fived and said hi to a few friends and other Bergen teammates (was nice to have a few of us there!)

I was on the line off to the side, but near some people that I knew would be good to chase once we took off. I was near a girl who I bobbled back and forth with two weeks ago at the 5k so I decided to just hang with her for at least the first mile. It gave me something to focus on and we were holding a good pace. The first mile is 95% straight, the marker was shortly after the first course turn. This mile also slight elevation loss. 5:55 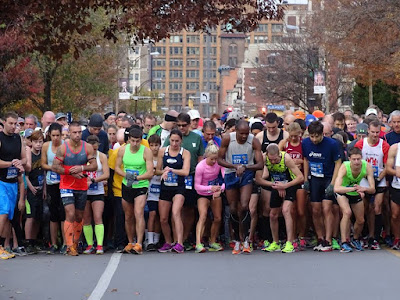 After we made turn two, I pulled ahead and started picking others off as I could. I wasn't paying attention to my watch, just focusing on form and pushing forward. The second mile had two turns, and finished on a slight grade. I did see B shortly before the end of the second mile which made me smile. 6:06 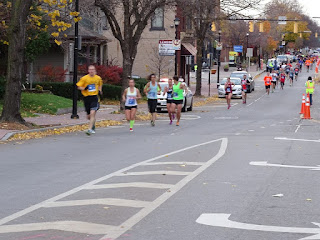 The third mile of this course (new course this year) definitely was the most challenging of the three. First off it's the third mile of a 5k, it's supposed to be a grind at the end. Secondly this mile has FIVE turns and a short steep incline right between two of those turns. It was just enough to take the wind out of my sails, and admittedly I didn't pace it well. I continued to pick people off without looking at my watch, I had no clue when I needed to kick. I unfortunately waited until the final turn onto East which left me with very little room to make up ground. Live and learn.

I pushed as hard as I could and was running 5:02 pace for the last 30 seconds. In my head I was a little mad at myself for not tackling the last mile better and kicking too late, but then I saw the clock and knew I was about to PR. 18:46 was the official time, and gave me a 3rd place finish. Anger went away pretty darn quick, I can't help but be my own worst critic but I'll also celebrate my success just the same.

Overall I am happy with how my times have been with shorter distances this fall since Erie Marathon. I still need serious work on short distance pacing but I know that I can fix that in time. This was a good confidence booster for Philly half, and was very pleased to end up in top 3 ($50 was a nice unexpected thing to walk away with). A few of the women I thought were racing ended up not, but this was still a solid field- I definitely ran knowing that I had quite a few women right on my heels (good motivation to push though!).

This week will be a bigger training week for Philly and next week I plan to do a small taper for the half. If you want to know about the previous two weeks of training you can check that out ----> here.