I'm still processing some race thoughts, but I do have some general things about the weekend for you :)

After my last post on Friday, I worked and then headed out of town to get the fun started. I rode out to Seneca Lake with a friend of mine since John left earlier that morning.

It was an afternoon of friends and fun at the MicroMussel Triathlon- a very short triathlon involving costumes and tricycles (or in our case....a moving dolly with a fake plane on it). John and Corey dressed up as Goose & Maverick from Top Gun, and had everyone laughing the entire time. Truly a great way to start the weekend off in a fun way! 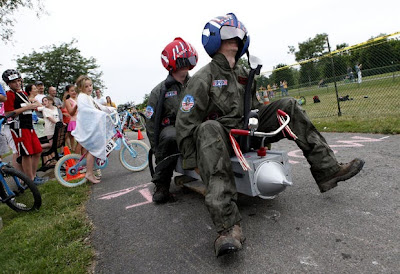 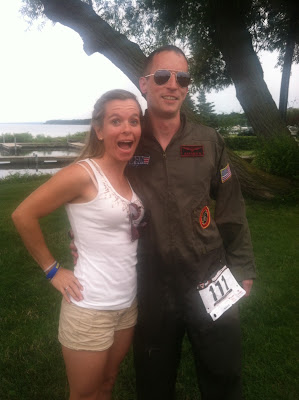 Saturday was the Mini-Mussel Triathlon (Sprint Distance). John and I were volunteering, and a few of our friends were competing. I spent the first part of the morning at the "mount line" yelling at athletes not to get on their bike until they were at or past the line. It was a great place to be as I got to see all my friends as they started the bike, and cheer for others as well. Once people started coming in from the bike, I moved over to the "dismount line" making sure everyone got off their bikes before the line. More yelling and cheering but I was having a great time, and again it was a great place to be so I could see everyone! Volunteering the day before my race was a great way to get inspiration and motivation, and to see logistics of race location!

Being at the"dismount line" is where I first learned of "the accident". One of the faster cyclists to come in, asked me if I knew what the name was of the person injured on course. I said I did not know, and he sternly told me to find out: there was fear in his voice. My friends were standing near me and heard the whole thing, they ran to the volunteer tent to make sure they knew there was an accident on course. They knew- and it wasn't good. After that, many people were asking me questions about it as they dismounted their bike. They all had to ride past the accident site, seeing ambulances and crowds of people and blood. I can't even imagine how hard that would be to see, emotional and scary for sure. Then later on, the questions turned towards family members cheering near me "has so & so come in yet?"-- everyone was worried it was a friend or loved one.

After I was done at my volunteer post I walked around talking to my friends who had finished, and spent some time helping at the volunteer tent. I had heard bits and pieces more about the accident, but nothing definitive. Everyone was on edge, it was like being in high school all over again- rumors were flying, the bad news was that it was actually as bad as everyone was saying.

I actually left to go get some "me time" as my nerves were building for the race the next day. I went back to John's parents on the lake and practiced mounts/dismounts by myself before heading to packet pickup and the pre-race meeting.
Saturday night was spent at the house with all of our friends. Carb-rich dinner, some wine and good company; perfect way to unwind the night before the race. They have been doing this for Musselman weekend for a few years now, and I was happy I was able to join in the tradition. I also spent a little time on the hammock outside, trying to unwind and mentally prepare for 70.3 miles. 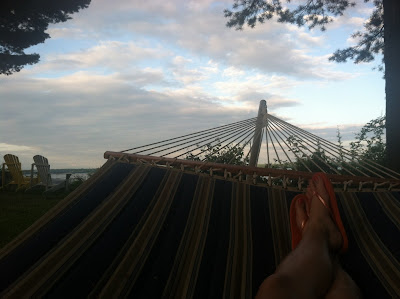 We did find out more information regarding the accident as the night went on. The man, who was a Rochester native was pronounced dead after being transported to a local hospital. An SUV had ran out of gas and was parked as far over on the shoulder as possible, the cyclist had collided into the back window. This is the first fatality in the 10 year history of the race. Sadly, we can't look and analyze exactly what happened, we will never really know-- and at this point it doesn't change anything. The victim, his family and friends are definitely in my thoughts and prayers.

It was hard not to think about it, it was also hard not to let my parents find out about it.  I had sent them an email with links to maps, race website and my time estimates for them as they were going to be there Sunday. The last thing I needed was my mom to find out someone died on a 16 mile bike course when I was going to be on a 56 mile course the following day. I didn't want her freaking out the entire 3 and a half hours I was going to be on the bike. Did it scare me? you bet; but I have that fear every time I ride, accidents happen and the best we can do is just be aware and ride as smart and safely as possible.

Sunday was race day for me (recap to come this week), overall it was a great day. I survived my first 70.3! I had fabulous support crew of family and friends, and the race staff/volunteers were just as amazing. I can't say enough good things about Mussleman races- Jeff Henderson and his crew(including my friend Amy who is the volunteer coordinator) do an amazing job. From the different race options, mass volunteers, amazing swag and sponsors, pre-race meetings that are fun & informative, "green" race characteristics, all of it makes for a memorable weekend. Congrats to them for 10 years and cheers to many more! I already have next years race on the calendar...more volunteering and more racing!

What did you do this weekend?

Cyclists- what are your riding fears?
Posted by Unknown at 2:55 PM