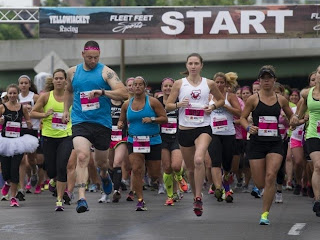 So if you notice anything about this photo---all women...except one.

Well that was the concept behind this inaugural race; all women except one man. The "one lucky man" was chosen by random drawing (I believe it was $10 an entry, with all proceeds going to charity). The start line always holds emotions, and nerves and lots of things going on, add in a ton of estrogen and one guy....I'm not sure lucky is the word I would use, but he was a good sport all the same. A few of us girls were chatting it up with him at the start, and he was giving the jokes back just as good as he was taking them.

I had an up and down week with my workouts last week so I really didn't know what to expect. I didn't go in with the goal of setting a PR, but I knew if I had a good day it would be possible. 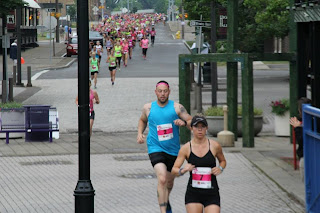 This was early on in the race, you can see by my lazy form and "eh" face that I just wasn't feeling it. I pushed forward and ran the first mile in 6:10 according to the guy yelling at the 1 mile marker. I was already having issues breathing, 90% humidity makes it super hard to catch your breath. My legs felt fine, the breathing thing was a whole separate issue.

After that it just went downhill. I was in no-mans-land. I started the race in 3rd, and that is where I stayed the entire time. I could see 1 &2 but they were far enough away that it wasn't quite enough to push me and the gap spread more. The course was cool to see parts of Rochester but it was pretty quiet, few spectators and little going on. I knew it wasn't my day and I was okay with that. I have a 5k in 2 weeks that I really think will be a good race for a PR (it's actually the course that holds my PR right now). 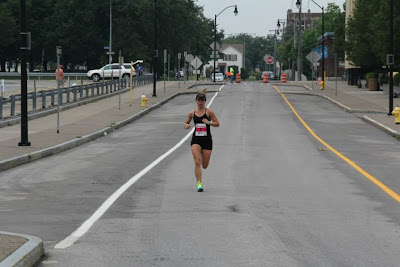 I finished in 19:42 and the same 3rd place overall that I started. So I told myself I am not allowed to complain about my time. There was a big time in my running career where I was chasing sub-20 and it took me a long time to get there. BUT I got there, and since then I have kept most of my times under that. I had REALLY good races at MedVed ALS 5k on Father's day and again at Airport 5k this year, so that's why this was harder to swallow. 20-30 seconds feels like a lifetime in a 5K, hell when I was chasing sub-20 every second felt like a lifetime.

The race itself was well run, put on by one of the local powerhouses Yellow Jacket Racing, I think if they do it again next year it will definitely grow. They had 400+ people show up for a first time race, which was pretty darn good. They also did co-ed kids races after the 5k and it was so cute watching all the kids run! I think that made it a good draw for families, women run and then the kids do.

Have you been bummed about a time
that you previously would have been ecstatic over?

Have you ever run an Inaugural race before?