Marathon training is time consuming, challenging and whether you admit it or not- something that isn't done solo. Sure, we do the runs in our own bodies and put the miles on our own shoes. We do the work, but support from others is something I think many runners discount when looking at their training. Whether it be words of encouragement from a friend, someone calling you to make sure you are up, maybe actually running together, little and big things all make a difference (especially the little ones).

I have no shortage of great support from friends/family. Quite a few of my best friends who I talk to daily don't live here in Rochester. Some don't even live in this state, but it doesn't matter- they take the time to encourage me, ask about training, and even come to races. That's what friends...and runners do. The running community here in Rochester is pretty awesome too, I know I'm lucky to have such great friends/runners also in the area.

The long introduction was to bring me to the point that runners are great people, they support others while training AND racing. This past weekend some friends of mine hosted an off the books half and full marathon. It was a Sunday run, on a marked course with volunteers and post-race celebration. I had 23 miles planned for the day, so they offered to drop me off at mile 3, so I could run the last 23 of the course as my workout.

While I was reminded by a friend the night before- this was not a "pass/fail" kind of run. BUT, I knew that I wanted it to go well (no one wants bad runs, but you know what I mean). I knew that while a bad run wouldn't break me, a good run could help build me up this final two weeks until race day. This was the third time I have gone up to 23 in training for a race. The first time was last year training for CIM, where I had an AMAZING feeling run and it gave me incredible confidence heading into taper. I also ran 23 training for Rochester this fall, although that run wasn't so great but still got the time on feet in. My goal for this run was to focus on form, practice fueling strategies and test race gear and pacing. Coach had given me a progression pace plan with a warm-up and then progression down to the last few being faster than marathon pace. I was excited for the challenge.

I got up and did my normal puttering around, downed a bottle of GenUCAN and then made my way to my friends house. We met up with everyone else and I cheered and waved off the runners as they left on the double loop course. I was then dropped off at mile 3ish and waited until the one other person doing the marathon passed me and then jumped in to finally begin my workout. It was hard to keep slower pace the first 2 miles, but I knew there was a long way to go. I went back and forth for a while with one of the guys who was running the half, this gave me a good distraction. The course was rolling hills, which forced me to focus on form and effort- GREAT training run conditions. 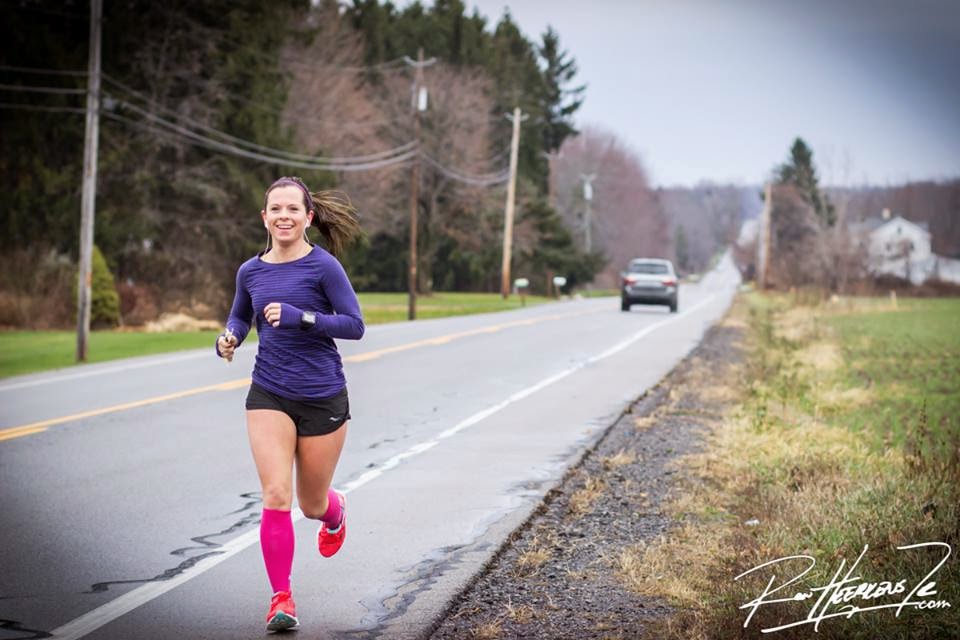 I never went more than 2-3 miles without seeing someone. Whether it was a water bottle hand off (I didn't have to carry one, simply take a sip and drop it), cheering, or road marshaling around a corner. One fellow runner even came out to take photos for the day(Photo Credits: http://ronheerkensjr.com/). Come on people if this is not your idea of a Sunday Funday Runday I don't know what is. I progressed as planned the first 10 miles of the run, spot on.
When I got back to the school at mile 10, there were even MORE people there than when we started. Cheering, ringing imaginary cowbells, offering encouragement and fuel. I smiled, waved, danced a little and went on my way. 13 miles to go, and this is when I was supposed to start dropping pace more significantly.

The first 12 miles of the run, I was taking one shot block (Margarita, for extra sodium) every 2 miles or so. This is a method I've used before in races/long runs that works well for consistent fuel and less stomach issues. After 12, I switched over to caffeinated gels (GU Vanilla Bean). When I got to 13, I wasn't feeling great. Maybe it was switch-over from fuel, or just general miles of bleh (it happens). 13-16 were those mental miles that required some will power, which was good training because 13-20 are my least favorite miles of the marathon. I also really had to pee during this time, but every time I found a wooded spot I'd consider- I'd see a car pulled over not too far ahead (Friends cheering) and decided I'd save my public indecency for later.

Around 17, I started mentally and physically feeling better, my turnover increased and I started feeling stronger. Gel kicking in, maybe. Support/encouragement from friends, maybe. General love of later miles, most likely. Desire to finish so I could pee, yeah pretty sure that was it. I was finally able to get my pace down to where it was supposed to be for 17-18.

Once I hit 19 I was supposed to be sub-7, so I knew I had to focus. I stopped taking water/fuel after 20, partly because I thought I'd burst and partly because I was getting in the zone and cranking out the miles. The last 6 miles were all 7:02 or faster. I knew the run would be a little longer, and I decided to hit that last section harder and practice my 'finish kick'. I ran the last .43 at 6:20 pace, which made me happy that after a hard 23 miles I was not on E and still could push. 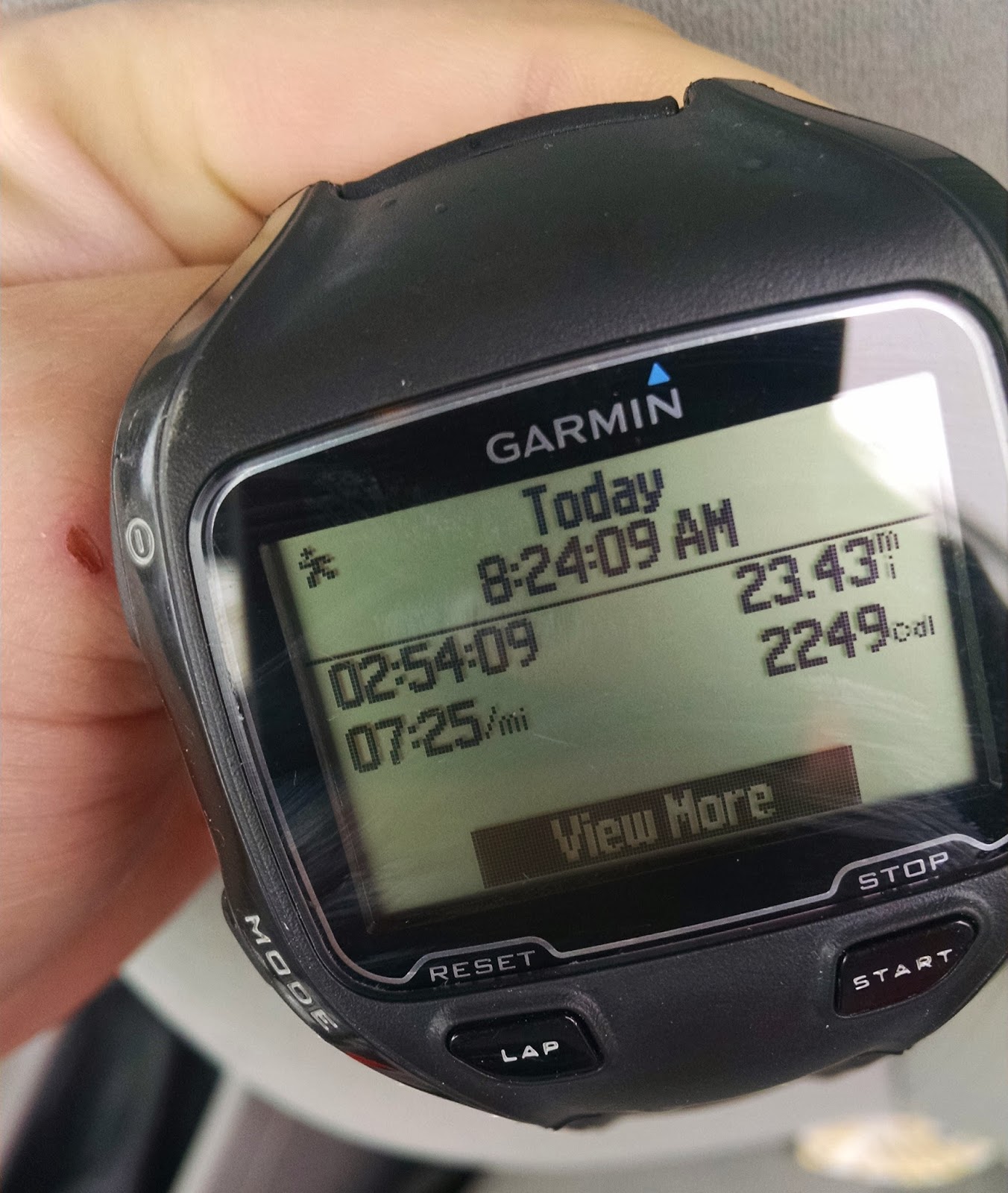 I could see everyone waiting, and it was a welcome sight after a long training run. I'm not used to people being there when I'm done. I admit, something challenging about making some of the changes I did this year, is that when I come home- there's no one there. Sometimes you just want to finish a day/run/workout (good or bad) and be able to come home and express yourself about it. So finishing my best 23 miler (not in a race) to cap off a great cycle and having friends there (and people I had just met!), meant more than I could say.
Overall I am really happy with this run. I was in control, stayed relaxed, and was able to finish strong even after a few off miles. I worked on my fueling, and race day strategies. Heck, the terrain and weather even mimicked what Memphis will be like pretty damn closely.

I have one more workout today, a tempo which if done properly will give me a new half marathon PR. If only I could get a USATF official to come certify it for me. 10 days people, 10 freaking days and I couldn't be more grateful for this year in life and training (the good AND the bad).
Posted by Unknown at 11:00 AM