When I saw that Buffalo Marathon posted they were in need of pacers, I felt like it would be a good thing to do. I have done this race a few times, had both awesome and not-so-awesome runs there but knew I could try and help others have a good day. I ran the half in 2010, 2011, 2014 and I volunteered in 2013 so why not add pacing to 2015? It also meant that I would get a weekend in Buffalo with Britt- win/win.
I told them the times that I would be willing/able to run for the half (I wasn't willing to pace a full right now), and ended up getting the second half of the 3:40 marathon (1:50 half). I was excited to run the second half of the marathon and help people when they really need it most- and hopefully help some people BQ! Running the second half meant I couldn't watch Britt and the others in the half finish- but I was able to cheer at the start which was better than not seeing them at all.

I have paced friends and family members in races and training runs but never officially in a race- for strangers. I've thoroughly enjoyed 99% of the times that I have paced people, there was that one time I dealt with a mile 3 temper tantrum (complete with stomping feet) in a half- that wasn't quite as enjoyable being yelled at. I've paced people on their good days, and on bad days and even on the 'bad days' it's still rewarding to help even if goals aren't met. In fact when people are having an off day, they need you even more.

I was really excited though, to give back a little. It was fitting considering last year at Buffalo, I had complete strangers help encourage me the last few miles of the half and helped me get under 90 minutes for the first time. This year was my turn.

It worked out really well that I knew the girl who would be running the first half of the marathon for our pace group. I jumped in a little before the half point and got an update from her, and she passed me her watch. I ran using her watch with overall marathon time on it (gun time), and my watch with splits/pace for second half. After the half marathoners split off we took to the rest of the marathon course. I asked some people their names, and how they were doing. I wanted to know what I was looking at, who with me was shooting for BQ etc.

The first few miles I felt like I couldn't find a groove, I was struggling holding set pace and was concerned about letting people down. But once I felt like I found it- I was able to hold it just fine. I used the overall time more than anything as I had mile splits printed out on my sign. I kept an eye on my pace (I had my watch set to see overall pace for the whole run, not the miles) and kept it around 8:18 {1:50/3:40 is 8:23 but from what I gather the general rule of thumb is 5 seconds/mile to account for not running 26.2 exactly}. I had a big group for quite a while, but knew that it would fade off as the miles went on- that's the marathon folks.
The group got smaller but having asked peoples names it helped me to encourage them better- knowing what their goals were etc. We had a pretty tight group just ticking off the miles, I had studied the course enough I knew when to tell them to push or hold back (based on upcoming elevation). We picked up some people as we went, and tried like hell to keep them with us- some did. It was getting warm quick and I was reminding everyone to hydrate, including myself.

The final few miles I told two of the guys to start going ahead of me, they were feeling good- and I knew they wanted a time UNDER BQ and not just at a BQ. I could see them and their bright shirts in front of me and every few minutes I yelled up to them with some encouragement. I was excited when I could no longer see them, I couldn't wait to get to the finish to see how they did.

I was pretty much alone the final mile or two. I passed some walking on side and tried to get them to come with me, then I found a young man- who probably hates me. I leached onto him like nobody's business. LET'S GO! I was right on his heels pushing him the last 1/2 mile or so- I knew I was going to be VERY close to my time so I had a few wiggle room seconds to try and get this last one in. I just did everything I could to keep him moving, telling him to go have a beer with me after the race. Right up until the turn into the chute, I was pushing him. He finished right in front of me.

I crossed the finish line in 3:39:55- almost dead on gun time. I was so happy I was able to hit pace so well (after feeling nervous first few miles).

Shortly after crossing, I made my way through medals (I didn't take one, they were the marathon ones- and I didn't run a marathon) and got some water. I looked up to see that one of the guys that I was pacing earlier (who went ahead) was waiting for me- he BQ'd by over a minute! He gave me a huge sweaty hug and thanked me- I had the biggest smile on my face. I then made my way back to the end of the course to watch other runners come in.
In general it was an amazing experience, very rewarding. Helping others, encouraging them and being there for the good and not so good miles- it's important. I can see why people make a habit out of pacing a few times a year- its a supported long run and you get to help others. I'd like to make a point to do it once or twice a year, half or a full distance. I had so much fun doing it, and smiled so much more than I normally do in races!

The only thing I didn't really like about it- was having to let people go. When people started to fall off, the best I could do is talk to them and encourage but I couldn't really pull back to try and help them more. Part of the job is to hold pace, I can pin point at least 4 times that I would have loved to pull back just for a little to try and get someone back on track- but couldn't. I guess that is one thing about pacing individuals (friends and family) that I love, I can stay right with them no matter what.

I did also come to some realizations about my own pacing abilities, what I think works and what doesn't(personally for me, not necessarily everyone)- and what is ideal for races- that coming in another post for sure.

This only made me that much more excited to run side by side with Britt at Chicago for her first marathon in October with Saucony 26 Strong! Going to be epic! 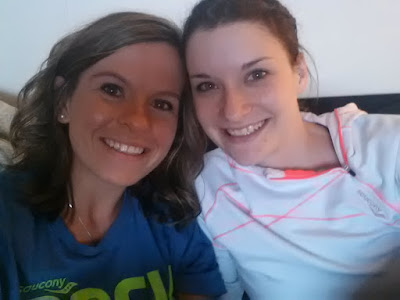