My first trail race was in 2010, where my ankle decided it wanted to roll itself like 23047230 times over the course of the race.....leaving me with a pretty ugly looking bruise and swollen ankle for a few weeks. Since then I have maybe rain trails 10 or so times and have refused to race on them. Facts are facts: I am a clutz, I trip over my own feet, and I fall....a lot.

I agreed to do this short trail run last night, advertised as a "mud run", knowing that I wasn't going to go all out....I didn't want to bust an ankle, or get all beat up--I'm a girl on a mission, and injuries don't suit that mission. John and I had friends that would be there, and it seemed like something fun to do on a random Monday night in the middle of nowhere.

It's a true no-frills race: no restrooms, no food (well, they did end up having ice cream...), bib was smaller than a note card and hand-written, start line was a rope on the ground, $20 entry fee that didn't break the bank....

Last year I found some +Saucony trail running shoes on sale and bought them. Weird, I'm not a trail runner but for some reason couldn't say no...they were a steal. Well I finally got to use them last night, and I tell ya what- it made a huge difference. As a girl who has never ran in trail shoes (always just used old higher mileage shoes), I now appreciate the stability and benefits of trail shoes. Don't read this as I am going to start running trails all the time, because that just won't happen. Just because I didn't fall and injure myself or die last night doesn't mean it wouldn't happen next time! But I might be open to running them once in a while. 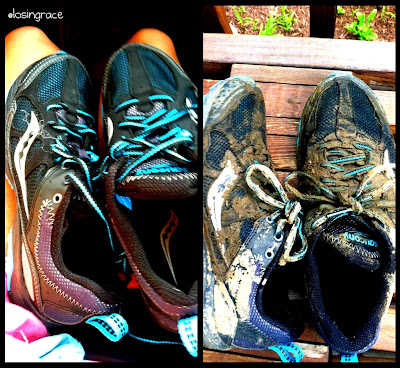 Girls raced at 6:30 and boys at 7:20. This was kind of nice because the guys could watch our stuff, and cheer us in and then we could do the same (read: we finished first, therefore Liz and I could have a beer while waiting for the guys).

Okay the actual race:
I started kinda fast, but was quickly reminded that I did 16 the day prior. I told myself to just relax and have fun with it. When I came up on the first mud puddle, stepped in and stepped out.....without my shoe. Yep- I'm THAT girl. Lost my shoe in the first mud pit. I quickly grabbed it and went on my way (ignoring all the little high school girls laughing at me).

I got passed a lot on the front end of the course. It was actually pretty easy to avoid the mud, at least most of the time. I wasn't wearing a watch so I had no clue how fast I was going or how far in I was. About what I assume to be half way through we ran on a path next to the road....that horses walk in. It wasn't about dodging the giant "plops", but dodging the giant divots the horses had made. I must have felt my ankle roll over 5 times. I slowed down a little and a few young girls passed me but I wasn't going to risk injury.

After going back into the woods I actually felt a lot better. I was passing people (those high school girls that were making fun of me earlier, they were left in the dust). There were more hills on the back end and I actually managed pretty well and never walked.  I noticed more and more people fading and at this point I was grateful for my ability to pace and finish strong. I ended up finishing in 7th and Liz took 6th. Placing or timing was never a goal going into this, but it certainly was a nice plus. 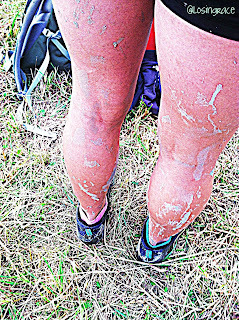 Post Race: Liz and I finished close together which was nice, we quickly found the guys as they were getting ready to run. We assessed our "mud levels", took pride in beating majority of the high school girls there (honestly, the majority of the girls field with high school XC runners), and promptly cracked open a beer. Our work was done. 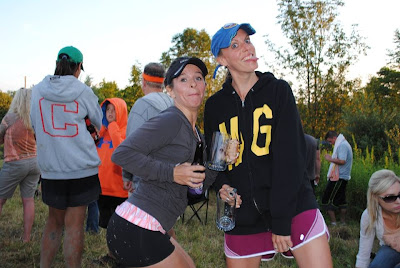 We hung out while the boys ran, cheered them all in (John ran his first race since the surgeries earlier this year! He did great!), and then went back to our friends house for pizza, beer, and snacks. It was definitely a much needed night of fun with good company after a hard week last week. 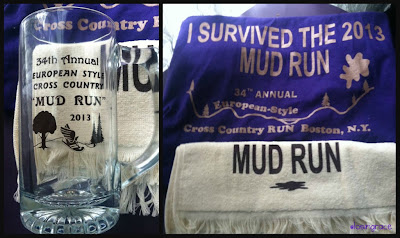 Have to ever done a trail race?

Do you fear getting injured doing trail races or obstacle races?
(yesssss, very much so...I have had multiple injuries due to trails, but I am trying to step out of my comfort zone more and try new things again)

Favorite Beer?
(Stouts and porters for this little lady!)