Yesterday afternoon was my first official I'm-so-pumped-up-and-excited-for-the-marathon round of obnoxious smiling and happy tears....while sitting in the Target parking lot. I'm really a weirdo, accept it.

Last night was also the first official I'm-racing-a-marathon-in-a-week-I-really-am-questioning-EVERYTHING round of obnoxious short tempered snarks and sobbing session. Lucky this one wasn't quite as public. 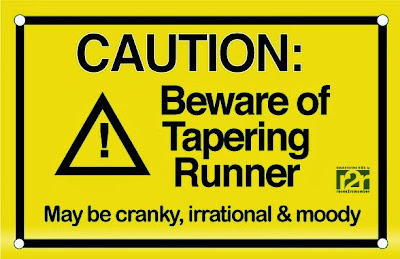 I'm not telling you this to make you feel bad or anything, I'm telling you that I am currently in second D of the stages of grief: taper edition...I'm telling you this because I'm a human being. I feel like we get caught up on OMG-bloggers-are-not-human-they-never-have-a-hard-time and well, I'm letting you know that isn't the case.

I'm going to make sure I relax and take some time for me, and I'll be good. Hell I'll probably be having another one of those obnoxious smiling fits jamming to "wake me up" by the end of the day. So goes taper people, at least in my little world. I've worked incredibly hard to get to this point, that point where I am actually going into a marathon as a race....not against some BQ time, not against another runner, but against myself and what I know I am capable of.

I've accepted that it's time to trust my training, and trust myself, trust the taper...

I've also accepted that it's time for a taper snack....yeah I definitely embrace the food part of taper. Wholeheartedly. Pardon me while I go inhale some Starbucks, goldfish, and a lara bar.


Roller coaster days (not just during taper)...
what's something that you take time to do for yourself?