Maybe you know, maybe you don't but according to Elisabeth Kubler-Ross there are "5 stages of grief". The 5 stages are DENIAL, ANGER, BARGAINING, DEPRESSION & ACCEPTANCE. Not everyone goes through the stages in this order, and it's very possible to double back and go through some more than once. Now, when you think of grief we think of losing loved ones, finding out bad news, traumatic events, etc. What you don't think about is the 5 stages of grief as pertaining to.....


Well, let me enlighten you.


Denial
Biggest form of denial during taper: denying our abilities.
I haven't trained enough.
I can't do this.
I'm going to DNF.
I didn't do enough 20+ runs.
I'm going to come in last.

Or the opposite, denying the seriousness of a marathon...
It's just another race
Its only 26.2 miles
One of my All time favorite quotes about denial:
"Sometimes reality has a way of sneaking up and biting us in the ass. And when the dam bursts, all you can do is swim. The world of pretend is a cage, not a cocoon. We can only lie to ourselves for so long. We are tired, we are scared, and denying it doesn't change the truth. Sooner or later we have to put aside our denial and face the world, head on, guns blazing... Denial. It's not just a river in Egypt. It's a freakin' ocean. So how do you keep from drowning in it?"- Meredith Grey


Anger
When your body is used to working out so many hours a week, and you cut that down to well...very little (or nothing)...you're sure to have some out of whack hormones....do we need a reminder from Elle?
And if you're like me, where running is your main stress reliever and something you do sometimes to keep yourself from punching someone in the face...well...taper can be hard.

Little things turn into bigger things, and big things...well they turn into emotional angry tears and a bottle of wine. Either way, we get frustrated and temperamental and we aren't the easiest people to be around....sometimes I think our spouses should get the marathon medals, just for putting up with us.

The good news is, you are eating more during taper, so your chances of getting hangry (so hungry that you are angry) are slim to none. We will call that a silver lining?


Bargaining
I think the biggest thing we bargain for...if I just run one more long run, I'll feel better for the race. Cramming extra workouts in the last week or two before the marathon really isn't going to benefit you. It may mentally help you but physically it's more likely to hurt than help. We beg and plead, just one more workout, just one more run. A marathon isn't like The Biggest Loser, folks there is NO last chance workout. (You can totally quote me on that people.) 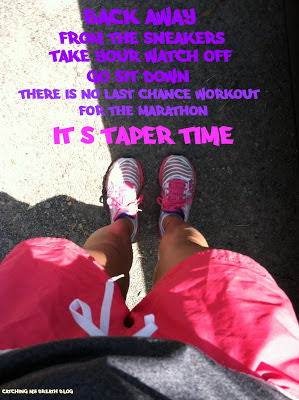 Depression
As I said with anger...our hormones get out of whack with endorphin levels lower than normal. This can cause some serious emotions and definitely bring your mood down. Like anger, little things become bigger things and big things become...category 5 hurricanes.
During this time, it's also common to get "phantom pains". Your body starts playing tricks on you, and it's seriously all in your head. Twinges and passing aches and pains, usually in spots where you have had previous injuries. I have noticed I get it the most in my foot where it was broken last year, before that my phantom pains were usually in my knees where I have had many problems. We physically feel tired, and pay more attention to the little things about our bodies and it only makes taper depression worse. Weight gain (from eating more and running less) is common and we all know that's more than enough to make you depressed. The good news is, taper is a set period of time and this won't last forever. In the mean time, I'll try not to chop off my foot because of the phantom pains, no promises.

Acceptance
Acceptance, it's a weird thing. When it comes to acceptance in the spectrum of the marathon taper, it comes in a few different forms.

Accepting: The alarm goes off...you're running 26.2 miles today.
Once it's actually race day, it's hard to deny it. It's here and you can't change it. This is when I wake up super early, and try and forget what I will be doing in a few hours. We accept that it's finally the day, but we move slowly as possible trying to give ourselves more time.
Accepting: Standing at the start line
This is where we accept the fact that we're there and it's almost time. This is also the point you see many runners just looking around (people think we are sizing up the competition), when in truth we are all looking for an escape route.
Accepting: The gun went off, time to run
This is the point where I accept the fact that there is no turning back. It's time to run, time to breathe and just move forward.

Accepting: Marathons Hurt
Somewhere between miles 20-26 you learn to accept the fact that your body is going to get tired, it is going to be sore, and you accept the pain. If you're like me you secretly are wishing a freight train would tear through the course and run you over, but either way...you accept the pain and keep moving.

Some examples of pain around 24-25 miles during marathons #2 &3. (definite forced smile on the right but it's clear by my form (and the medicated patch on my leg) that I was struggling. Accepting the pain means continuing to put one foot in front of the other.

Accepting: You just finished 26.2 miles
You did it, you crossed the line, they put a medal around your neck. Regardless of how long it took you to get there, the fact is you got there. You have no choice but to accept finishing because it's a fact...you got there. 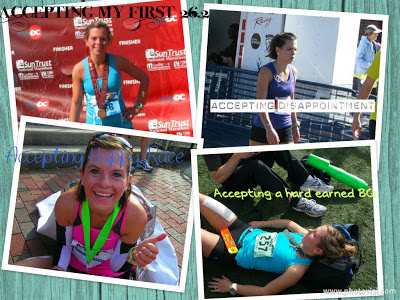 Accepting: Your time good/bad
As runners we naturally push limits, we like to see how far we can go, how fast we can get there. When you cross the finish line you have this time, it may be what you wanted and it may not. If it's slower than you wanted, accept that you finished but don't accept that being the best that you can do.  You NEED to give yourself time to relax and try again DON'T GIVE UP BECAUSE OF ONE BAD RACE. If the time is what you wanted (or better), accept it and be happy...and then accept the fact that you should push yourself to see if you can do even better. Never stop trying, always work towards a goal! I've had my good races, I have also had my bad. I accept both of them and both good/bad races make me want to try again, to be better, to be stronger, to push myself.

We go through all the stages during taper, and that doesn't even begin to describe everything we go through during and after the race. When they say marathons are 90% mental and 10% physical, it's more true than most realize. We put ourselves through it but it's worth it.

Have you noticed you go through these during taper (for any race, not just marathons)?

What are ways you help yourself deal with taper issues?