So the other day I did something I hadn't done before.
Well, sort of.
I ran to the gym, and to the store, and then home.
It was a SHORT running adventure/commute, but a good one none the less.
Hey you gotta start somewhere,
And a great way to do a taper run :)

I've ran to places before instead of driving, but never where I had to wear a backpack. It was a nice day and I needed to run on top of my other workouts so it seemed like a fun idea. I wanted to bike & swim at the gym so I had to pack my suit, goggles, towel, hair brush, swim cap, lap counter and water bottle at bare minimum. So I dug out my Camelbak hiking backpack. I packed my gear and made sure to wear something running that I would be okay spinning in as well (that way I didn't have to pack something else to wear).

A few years ago I read 50/50 about Dean Karnazes. It's about his journey to running 50 marathons in 50 states in 50 days (overachiever, I know...right?). Actually I really liked the book and took a lot of things from it. Where I am going with this though, is I remember at one point him talking about how he will just go for adventures running with his backpack. Bring his phone and wallet and that way if his wife or kids need him to pick up something at the grocery store he could. I remember thinking, running is MY time NOT errand time. But now looking back, I'm like well there might be something to that.

So when I packed my bag I threw in my phone and ID (even though I had my RoadID on my wrist), I also threw in some cash and my debit card just in case (this will come in handy later). I even took a plastic Wegmans water bottle (empty) put it in my bag knowing I could fill it up at gym, but it wouldn't weigh me down on the way there. I remember thinking, Dean would be proud. 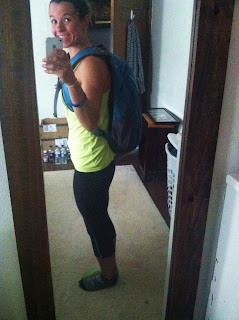 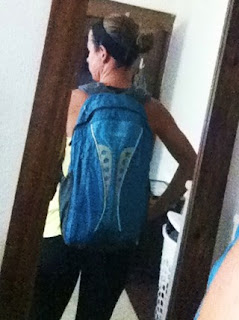 I got the pack on, made sure straps were adjusted and ready to go.
I did text Hollie and told her what I was doing, that way someone knew my plan.
Sorry for the craptastic pictures, best I could do....and yes I am not wearing matching socks, that's normal for me though.

I got myself ready, took some ENERGYbits,
chugged some good old H2O and I was ready. 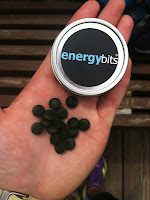 I quickly found out that the backpack was seriously going to affect my form. I wasn't worried about pace, but I worried how comfortable this was going to be. The pack didn't bother me at first, other than the fact that I knew people must be staring at me because I felt like I was running very awkwardly. Kind of like this....

Okay anyways. I ran the 3.72 miles to the gym in 30:15 (8:07 pace) which was surprising considering it felt MUCH slower. My only issue on the way there, was that one of the backpack straps kept riding up and rubbing against my neck. But I made it.

When I got to the gym I quickly signed in, and went to change into my swim suit. I got in the pool (for the first time in a few weeks...I've been slacking...please feel free to yell at me about this), and I felt good. Laps went by smooth and steady paced...then...my goggle strap snapped. $%&@. And that was that. This one had snapped before and I had already jerry-rigged it once so I knew I couldn't do that again. So my 1500 yard swim went to 500 yard swim with the snap of a strap. 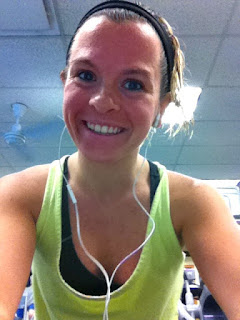 I was getting my sweat on....then a man in a pink Hollister shirt got on the bike next to me. Dude really? See that blue post it on his screen...it had TWO words on it. Weights & cycle. He couldn't remember those TWO words or the order they went in? Anyways. He proceeded to furiously spin and shake his sweaty mop head of hair everywhere for 30 seconds then stop and cough trying to catch his breath. I amused myself by watching him try and do this for a while.
Okay, enough about meat heads. I did 60 minutes on the bike (22.9 miles) and was ready to head home. I grabbed my stuff and walked outside to find it sprinkling rain (my favorite!) it felt so good and refreshing, unfortunately it only lasted a few minutes. My legs were not moving quick and my backpack was still bugging my neck but I put one foot in front of the other and loosened up as I went. I had to pass Fleet Feet on the way home. I remembered that it was "Diva Day" (Women's specials and sales) and was planning on going later, but I figured "why not" so I stopped running and went in the store. (Run from Gym to FF was 2 miles in 16:29[8:15 ave.]).

Had a nice chat with the fella's in Fleet feet. One of the guys noticed my spiffy Kinvara 4's and asked me how I liked them. I said...well this is my 7th pair of Kinvara's so what do you think? He laughed and I proceeded to tell him how much I love these shoes and how well they have worked for me. Nice people there, I tell ya. Of course I had to buy something while I was in there (duh). So I got a nice new shirt and even bought myself a new pair of socks for the marathon next weekend. (I'll actually wear matching socks for the race, only because they didn't have these in 2 different colors for me to get...true story). 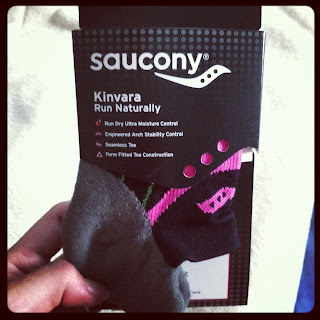 So I put my stuff in my backpack and continued home. 1.71 miles in 13:32 (7:54 pace). I was happy to finish stronger than I started, especially considering there was a swim and bike in the middle.

I know this was a short running commute/adventure but it was a good experience. I really liked running around and not having to fight traffic to get places. Like I said, I have run places before but not where I needed a backpack. If I were to do this again, I'd need a running backpack that won't give me a literal 'redneck'. I do like the concept though, it was a great way to get a workout in and run errands. I live close enough to so many things that I could see myself doing this more often if I had the right gear for it.

This was a fun and different way to get a run in. Planning fun routes is a good way to get runs in and not be so monotonous. Normally my 'fun runs' are runs with friends (thank goodness I get to run with Hollie all weekend!!!), but I feel like I could make more fun routes for solo runs if I do them this way. This was also a really good way to break up the boredom of taper running.

I wanna try doing a longer version of this sometime, maybe just spend a day running around and seeing how far I can get. No, this doesn't mean I want to do an Ultra ANYTIME soon. I just want a damn adventure :)

Do you do running commutes?

Have you ever used a running backpack?
(If so, any suggestions for good ones?)

Oh, and in case you need a pick-me-up, watch this video about 2 Boston brothers who were separated after the bombing (both lost limbs) and reunited weeks later. Amazing. #BostonStrong
Video here
Posted by Unknown at 10:55 AM