This was a weird race for me- I had a very specific goal.

10ks are hard races to come by, they used to be the most popular race distance many years ago but I'm pretty sure 5k took that title(seeing as you can find a 5k pretty much anywhere, any time of year on any given weekend)

I chose this race not because it's small, not because of where it is, I chose it because I needed a 10k and it happened to fit into my schedule. I wanted a PR and I needed a PR and a sub-42. The reasoning behind all of this will come in time. I knew it would be a little more difficult doing this 6 days after a hard half marathon, but I had to take the chance.

It was a small race(less than 100 people), on a hilly course, so I knew I was going to have to do the work. There would be no pancake flat course to help me out, there would be no super-fast field to push me. I was left with no choice but to do this all on my own. Honestly, I was concerned but knew if I pushed I could do it.

John and I got to the race early, he had planned a trail run with a friend while I was racing, but started early enough so he could be at the finish. I did my warm-up and my legs didn't feel great. My feet were sore, but looking back I really think it's because my current shoes are seriously over their limit. I need to order new ones and have been dragging my feet about it.
The moment I put my flats on my feet felt instantly better.

Standing at the start line I was actually at ease. We were all joking around, and I started to feel a little more confident. Before I knew it, it was time to go. 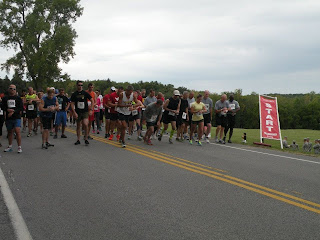 6:31
I started too fast off the bat, after about half mile reigned it in but it was still faster than it should have been. I settled into my 2nd place overall (1st female) very quickly although there was a guy holding on near me.

6:53
#$%^ Yep that's about what I could say with that. I was cursing myself for starting too fast but forced myself to calm down. There was still plenty of race left. At this point I lost the guy who was holding on to me, he fell back as the male lead pulled forward. Cue running in no-mans-land.

6:42
I couldn't see the male leader anymore due to turns in the road, so I just told myself to hold this pace and stay steady.

6:34
Finally getting into a groove, and also jamming to some power songs on my iPod.

6:37
This mile I got to see the most people out of the entire race. We turn off onto a side road (water stop on corner) and only go down about a half mile then turn around and come back....on my way back I finally saw some people coming towards me, got a few high fives and cheers from other runners.

6:40
After making the turn back onto the main road I tried hitting it a little harder, but this section of the course is deceiving. It's rolling hills that don't look too bad but were definitely enough that I was fighting it. I just kept telling myself to keep going, John was waiting.

1:23
John and his friend were standing at the top of the road before the last turn down into the finish. I cruised down the hill and tried not to fall (it's all gravel, makes it hard not to lose your balance). 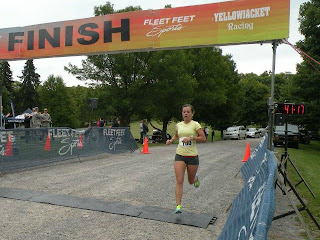 
After the race, I talked to the guy who won for a bit as well as some other runners. Then just hung around with John and our friend while waiting for awards. Something nice about small races- no fighting over bananas (I ate like 5), lots of space to relax and stretch out.

There was a few "snaffoos" with the race timing system, many people were listed under wrong race (there was a 5k and a 10k). I was listed under the 5k, so I had to sit there for a while waiting for them to change it (along with others)... it was a little frustrating (they questioned whether I won) but in the end it all worked out.

I ended up (basically where I started) taking 1st female and 2nd overall. The time was my goal and I hit it and that made me really happy, but adding placing in was just icing on the cake. After I got my award one of the vets came up to me and said you should have "chicked" ALL of the guys. I laughed and told him I had to let at least one guy beat me joking around. 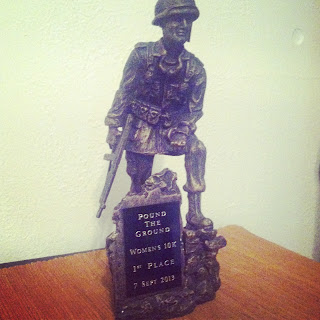 I love my trophy, something way different than the other awards that I have.
Definitely one of my favorites.

My previous PR was 43:03 (from 2011) so I was happy to put that to rest, and meet my goal of sub 42. Basically I have no idea how to pace a 10k, seeing as my splits were all over the place but I will work on it. This race left me excited for some future races when I am more focused on speed.

What is your favorite award you have won at a race?

Does your area have a lot of 10ks?