Secret: sometimes I have no clue what I want to write about on a particular day (and other days I have 50 posts in mind). There have been a few occasions I have waited until I read the WSJ at work to see if there was anything interesting to chat about. I used it with an article about waving, and an article about celebs running.

The article titled "The Slowest Generation" (WSJ writer Kevin Helliker) certainly caught my eye while sipping my morning brew at the office. 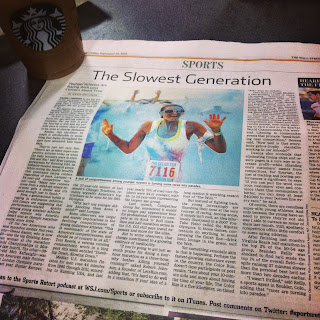 Helliker talks about how placing in his age group doesn't carry the same weight as it used to, and that is mainly because younger runners are competing nowhere near the level baby boomers did when they were 20-30 years old. Times that win races and age groups these days are certainly different from 30 years ago, there is no denying that. But I feel like we are damned if we do and damned if we don't. If I beat someone who is older than me, it's thought that I ONLY beat them because I am younger. But if someone older than me beats me, I am thought to be lazy and slow, in turn making our generation look bad.

"Many new runners come from a mind-set where everyone gets a medal and its good enough just to finish" - This quote definitely stuck a chord with me, because sadly it's true. If you didn't come from a competitive background before doing road races, you wouldn't have had the same experiences with running. It was odd to me when I started running road races to get medals for finishing. I have quite a bit of hardware from my high school and college days and you can bet I didn't get those just from finishing. Don't get me wrong, I LOVE my half-marathon/marathon finisher medals and it makes me happy getting them- but giving them to everyone does change the premise of what that medal really means.

One thing I have seen at a few races (I particularly remember this when I did Around the Bay) is that depending on your finish time you get a different color medal. This gives people something to work for, no matter what your level of fitness- you have a goal to attain and if you want a different color medal you are going to have to earn it.

1. Helliker--The Color Run is NOT an endurance event- I dare you to tell Kara, Shalene or Meb that what they do is on the same level as a Color Run.

2. It's not a race if there isn't a clock. If you want to give people a reason to train and work harder, time them. I guarantee if you start timing things and posting them, you'll see a lot less people walking through the finish line.

3.While yes these have brought more people into the running scene, Color Runs and obstacle races should NOT be associated with road races- they are on 2 completely different levels.

4. YES there is a place for these EVENTS, I think they are great at trying to get people active. I think it's good to incorporate FUN into running and training, but over emphasis on that is exactly why our country has seen a decline in the competitive field.

5. Maybe if companies like Competitor group would stop treating runners like they're just another Joe schmoe from off the street than the competition level would go up. You want people to train hard, race hard and start breaking records- don't take away their endorsements just because they aren't an NFL linebacker (and you know I love football, for real).

I'd be lying if I said this article didn't leave me fired up.
I have always been a competitive person, no doubt about that. I thrive on it, it's one of the many reasons I love racing- some get sick thinking about the start line and I get excited. I'm fired up because I love to race, I love to push myself I love to see how far I can go. Those of us who have worked incredibly hard to get where we are (in life and in running) are being thought of as "parade goers" instead of the feisty driven people we really are.

I know that sports and athletics are not the be all end all for everyone, I know that running and fitness are just a tool for health for some and I appreciate that. But this is about so much more than just athletics, where is the drive in general where are those youngsters that are hungry for success in any element?

I don't want to knock people who are trying to lose weight, those who do color runs or other fun runs as motivation to get moving. I commend you on trying to make healthier choices. But where's your drive, where is the push to get better? Pick a race and try and better your time each time you do it, pick a gym that is hosting a biggest loser type competition.
Push your limits and let the power of competition make you better.

Un-timed races (read: events) are doing no one any favors. You aren't holding people accountable, and you aren't encouraging competition.

You don't want a race to be a parade? then give them something to work for, make them earn that medal.

You want the younger generation to be more competitive? Then stop babying them, stop coddling children and teens all the time- make them put effort in at school and athletics or whatever they are doing. Stop giving kids everything and start making them work for it.

I really don't mind Color Runs or Obstacle Races(I'd be hard pressed to do another one though)- they get people moving, they are trying to help our country's weight problem and they allow people to be active and have fun. Some of those people might find they want to be more competitive after doing a fun run and they find their way to road racing, more power to them.

The fact is, Helliker is bashing our generation-
"Of course their are countless super-elite young athletes. And only because the young have no need to prove they're not old was I able to outrace so many of them last month. Still, apathetic competition offers little competition to some aging athletes"
I only hope that people of our generation read this article and get fired up like me. Take it as a challenge to get better, to get faster and work harder. I do NOT want to be thought of as the generation of people who are content and who run in 'parades' and not races. This is not just about running, it's about life- do we want to be seen as the generation that just sits back?

What about you, are you a competitive person?

What do YOU do to push yourself?

P.S. Kevin Helliker of the Wall Street Journal, if you're reading this- I challenge you to a race, and then a sit down chat. Battle of the minds- I don't think you'd walk away saying there is no competition in my generation.