Around the Bay 30k The Around the Bay 30k is the oldest race in North America ("Older than Boston" is it's slogan!). Yesterday I went for an 18.6 mile run with about 7,000 other people around the bay in Hamilton, Ontario. This is a race I can say I will definitely be doing again, next year it will be the 120th Anniversary. In all there were about 12,000 participants (30k, relay, 5k) .


The morning started like most race mornings...EARLY. We were up at 4:15 and out the door by 5. We got to Hamilton about 2.5 hours before the race(we saved extra time for border crossing and parking...). The time actually went by quick, we tried staying warm inside the Copps Coliseum, got some food, changed, and stretched out. Also ran into Jamie from Couch to Ironwoman, and her husband Mike. Chatted up with them for a few. We all had the same goal, get a good quality long run in as preparation for the Cleveland Marathon.

Getting to the start line was one of the most stressful times of the entire day. I was getting anxious, and just wanted to get outside to the start but there was NO WAY that was happening quickly. It was the biggest mess I have seen, people everywhere and no one was moving. Everyone was standing in one place, or trying to move towards the stairs to get down to the doors. Then you had those 'less smart' people who were trying to be the salmon swimming upstream which was clogging it up even more. Not to mention we were trying to shield John because he was on crutches and I was in serious "protective fiance mode", I swear that if someone hit his knee 2 days after surgery I would have absolutely lost my shit. We were trapped in the crowd for a while and I was getting even more anxious and started getting very nauseous because of it. Finally we got out of the coliseum but had to get to the car quick, say a quick goodbye to John and leave him on his crutches while the 4 of us  hauled ass to the starting corals. 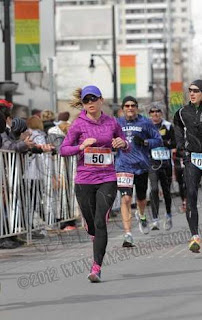 My nerves were so out of wack at the start. It's more than a half and less than a full, what the hell am I supposed to be thinking about! This was one of those times I was overjoyed to be in Coral A, because I could start closer to the front and have less crowd to fight. I was able to get into a groove pretty quick, but a quicker groove than I had planned. I went into this race with a goal of 2:15-2:25 (quite the spread...but it was a long training run), and I like starting out slower so I can finish strong. That plan went out the window almost instantly. My first few miles were almost identical, 10k split was 45:49 (7:22 pace). I decided to just go with it, took a risk and said I'll try and hold it for a while then back off if need be.

The first 15k of the course, I was very disappointed. It was depressing, very industrial area, not much to look at, and the roads were NOT in great shape. Cracks everywhere and potholes I could have gotten lost in. There was a stench throughout the first few miles (and last few coming back into the city), I think someone should call the sewer company because that was not pleasant! I also kept going "Where the hell is the bay?!"(I was already planning in my head, writing about the false advertising of the race name. hahaha). Finally around 15k there it was, beautiful breathtaking view of the bay, clear blue skies over the water and the sun shining down as we crossed over the grated lift bridge. This was also the point a Twitter/Dailymile friend Dave recognized me, BY MY SNEAKERS AND SAUCONY HAT. (Maybe it's because I post pictures of them all the time?). We chatted for a few, then went on our way, and I decided to try and stick behind him for a while, knowing he was shooting for a faster time than I was. This is where my I took my second risk, but I figured 'hey, it's worth a shot'.

The rest of the course was much prettier than the first 15k, nice small neighborhoods, and more things to look at. The last 10k was rolling hills, the only one that really got me was the damn hill around mile 16-17, I am pretty sure I cursed more than a few times (This was my slowest mile split for the entire race.). In the last 10k you also run by what I assume to be the resting place for all of the dearly departed in Ontario. This cemetery was HUGE, the only one I remember being at that were bigger were the cemeteries in Normandy when I was in France in 2002.

Throughout the course I bee-bopped to my music, high-fived little kids, tried not to focus on the distance, and just keep moving. My legs felt pretty damn good, my issue was the fact that my stomach kept cramping. The left side kept getting the worst cramp, and nothing would make it better. I fueled with shot blocks and water( I know for a fact I didn't take in enough though...I can pinpoint this as a major error).

The last 2 miles or so I had to dig deep. I was tired, and my stomach was cranky, and all I wanted was to cross the finish and find John. I spent the entire last mile trying not to get sick on the lovely spectators, and almost bit it going down the steep ramp into the coliseum. (I'm glad I didn't but it sure would have made for a great story). I took my sunglasses off and put them on my hat, and gave it what I had in me passing about 5 people in the last 100 feet, crossing the finish line in 2:16:14 (7:18 Average pace).


The race ended inside the Copps Coliseum, which was cool, and they had the entire lower level set up for runners (medals, food, water, etc). Liz (one of the people I went up with) caught up to me while I was gingerly walking around aimlessly, she finished in 2:18! While walking around, we had the pleasure of seeing a man strip down to tighty whities ONLY in the middle of a crowd (Come on, I really DON'T need to see things like that.)Then we went up and found John camped in the stands with his crutches being an awesome spectator. I have to give him some props here, he was supposed to run the race with us but instead had 2 knee surgeries within 50 days and still came to play "race mom" for the 4 of us running.

Overall I think it was a well run race
(they have been doing it for 119 years!)


here's some thoughts...
*Great medals and race shirts
*Course wasn't over challenging but wasn't super easy either
*Rearrange booths/setup within the Coliseum to avoid the clusterf* that there was in the morning ( Don't put expo booth right by stairs)
*Don't tell people they can't use the escalator while you stand there and block it (when J came back in after the start the escalator was running but some guy wouldn't let him use that or the elevator) even though he was on crutches.
*Plenty of Food/water after the race for runners, that was very good!
*I was pleasantly surprised how many spectators there were along the course
*Each kilometer was clearly marked and had a running/inspirational quote on it, I really liked that!
* Good amount of water stops along the way
*Disposable chip timing was commemorative with name on it


*They should have put signs up for directions to Corals
*Grim reaper at top of hill, I give them credit for this


The last thing to mention about this race is:
*Stop the trains & Have some respect!I didn't experience it personally this time, but I read online after the race that there was a group of people that got stopped part way through the race for a train. I had this happen 2010 Buffalo race, it's not fun. I can understand why those people were angry. Even if they weren't set to win or anything, you train so hard and have a goal and then a train runs through stopping you?!?!?!
It is one thing to get stuck at a train(things happen), but to have a race director say this:


I hope everyone had a wonderful weekend :)
I do recommend this race(as I also recommend the R.D. apologize to runners), it was a good race and a great training run. The timing falls great for spring marathons, I know so many people were there to get in a good quality training run for an upcoming race!

Email ThisBlogThis!Share to TwitterShare to FacebookShare to Pinterest
Labels: around the bay, race director, races, recap