The Good, The Bad & The Yummy

I've been pretty consistent about posting on Monday's about the weekend happenings, and finally came up with my title for it "The Good, The Bad & The Yummy". This way I am highlighting the weekend and it helps me categorize and process things, after all this blog is my outlet of things in my head and going on in my life. I'm going to come up with a logo for the GB&Y, gimme a little time.

Friday: 16 mile bike ride on my new wheels. I am getting more comfortable on the bike, and getting used to switching the gears and such. I'm still a newbie with my road biking, but I'm getting there. It was a sunny spring day I couldn't resist getting outside (although I had to bundle up, it was still chilly!)

Saturday:  Got to spend the afternoon/evening with good friends. Our friends from Vermont were in NY for the weekend to celebrate their daughters 2nd birthday:) Can't beat kids birthday parties, and getting to see friends from out of state!

Sunday:
20-mile run with Hollie. There are so many good things about this, hard to name them all. Let's just start with how grateful I am that she came out to run with me for 20 miles and keep me company. This was her first 20 miler (at once), and she isn't even training for anything longer than a half. Basically, she's awesome.

We had a great time talking the whole run, catching up on our lives, gossiping, making fun of things we saw along the way. Afterwards we continued our post-run tradition of getting food and coffee. Hit up Magnolias for some coffee and eats and more chatting. Also, what would a trip to Rochester for her be without Wegmans and Starbucks? Seriously. I love having these 2 things so easily accessible for me. 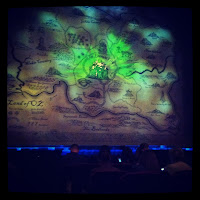 Sunday night, I FINALLY got to see 'Wicked' the musical. I have been so excited for this since John told me we were going a few months ago. The show was wonderful, sets were immaculate and the effects were over the top. I knew a little about the story line before the show, but not everything.  For those of you who aren't familiar, Wicked follows the story of the Elpheba the 'Wicked Witch' who grew up being friends with Glenda the 'Good Witch'. They went to school together, were friends and the story follows how Elpheba was really just 'misunderstood' and not evil. I loved the show, the story line and the twist ending. It takes place before/during/after "The Wizard of Oz" so you see some tie-in plot points (who the scarecrow, and tin man really are, and why the cowardly lion is a coward, who the witch under the house with the shoes is...etc). The cast was great, those girls had some pipes on them, which makes me ridiculously jealous because my singing abilities extend to shower singing, car singing, and happy birthday singing.

The Bad:
My car... is acting up....again....After spending over 500 on it last week, it's doing the exact same thing. The mechanic is going to be very sorry for having to deal with me again.

Syracuse lost Saturday night to Michigan. I was seriously bumming about this, there were a lot of things that contributed to the loss. 1st of all, we missed so many easy shots, which was frustrating as all hell. 2nd, The 2-3 zone wasn't affecting Michigan because they were getting to the other end of the court faster than we could be prepared for it. Last, I will say that there were a few bad foul calls that really put us under (I think the Michigan boys took some acting classes on how to make a fall look real when it's not, and how to act like a baby when they get love tapped). So the win goes to Michigan for the game, and so does the Award for Best Team Acting/Drama Queens.

My P.I.T.A....After yesterdays 20, I really do have a pain in my rear that wont go away. It's on the left side and affects my glute and hamstring, hopefully some more stretching and icy hot patches will help. I wore 3 icy-hot patches under my dress to the show last night (One of those moments, you know you're a runner), I kept walking around asking 'is my patch showing', not my finest moment.

Wind has been ridiculous lately...I won't complain about the temperatures as they have been getting better. Although I am ready for consistently warmer temps, I'll leave that be for right now. But the wind, oh dear me that damn wind. I'm tired of feeling like saying "were not in Kansas anymore toto". 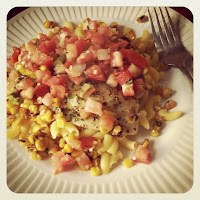 Friday: I made the man and I some Tilapia for dinner. I love it for many reasons, it's cheap, easy, and healthy. I am pretty sure we call that a trifecta. Seasoned Tilapia with spices and Wegmans basting Oil. Paired it with Trader Joe's seasoned roasted corn, baked both together and topped off with fresh salsa. Served it over gluten-free pasta to add some carb's. It was a last minute throw together meal and I was happy with how it came out. I don't cook nearly as much as I'd like, but I was proud of this. Although I do need to work on my presentation, it needed a little green or something. (If you want the recipe and what I seasoned it with let me know! It had a wonderful Southwestern taste to it)

Saturday: I ate chicken nuggets and tater tots at our friends daughters party, and it was fantastic. I'm not even going to pretend to feel bad about this.

Sunday: When Hollie and I went to lunch at Magnolias, I got the usual post-run coffee and water to drink. At first I was bummed we missed breakfast, but I was ridiculously happy with what I ended up getting. Started with a spinach and roasted red pepper soup, let me tell you...it was amazing. Then I got a wrap (built my own): Spinach wrap stuffed with prosciutto  spinach, roasted red peppers, tomatoes, and goat cheese. It was so good, I only ate half at the restaurant and ate the other half later before we went to the show, and it was just as good later as it was the first time. I don't want to leave out my Starbucks, because I did something I only do on occasion....a Quad-shot mocha. Yes...4 espresso shots in a drink, I had to make sure I would stay awake all afternoon and night for the show. 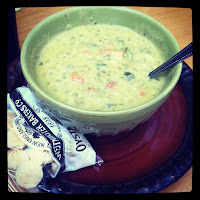 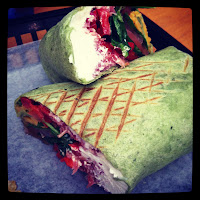 Overall it was a decent weekend, busy  but good none the less. Hoping to get more training time in this week, I think it's safe to say my motivation and mojo are coming back after they took a vacation without me. Excited to get into more runs this week, hopefully some outdoor ride time on my Felt, and some quality time in the pool as well. Life's a little crazy at the moment and will be for a while, but it will so be worth it when it's done! (Lots of good things happening at work!)

How was your weekend?
What are your plans for the week, big workouts?
Posted by Unknown at 10:54 AM